Movies that celebrate teachers and education

Here is a list of 6 of the best teacher and education-related movies that you should put on your list to watch (and watch again!) over the summer. These movies remind us of how hard and selflessly teachers work to make a difference in their students’ lives. These reel-life teachers and the educational issues that these films tackle, motivate us and remind us why we became teachers in the first place.

Set in 1959, this classic film opens at Welton Academy, a strict all-male private school. Welton prides itself on maintaining high standards and puts immense academic pressure on its students to gain admission into Ivy League Schools. 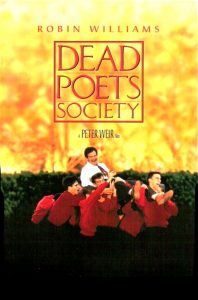 Enter Mr. Keating, the new English teacher who along with a burning passion for his subject brings innovative and unconventional ideas that threaten the deeply-entrenched rules and practices at Welton.

In one particularly powerful scene Keating introduces his students to the famous poem Carpe Diem (Seize the Day). To explain his point Keating shows his students pictures of old Welton students and stirs our soul when he says “They are not that different than any of you, are they? There’s hope in their eyes, just like in yours. They believe themselves destined for wonderful things, just like many of you. Well, where are those smiles now, boys? What of that hope?” As this sinks in for his students, Keating continues: ‘Did most of them not wait until it was too late before making their lives into even one iota of what they were capable? In chasing the almighty deity of success did they not squander their boyhood dreams? Most of those gentlemen are fertilising daffodils now. However, if you get very close, boys, you can hear them whisper. Go ahead, lean in. Hear it? Carpe Diem, lads. Seize the day. Make your lives extraordinary!”

In a school for children from rich families, who are expected to follow either their parent’s professions or a profession that is acceptable to them, Keating threatens the status quo when his students revive the Dead Poets Society and devote time to pursuing their passions in a cave where their secret meetings are held. Indeed one of the characters declares “For the first time in my whole life I feel completely alive!”

This classic film is about youthful idealism and nurturing meaningful connections with student. Dead Poets Society goes beyond teaching strategies and explores the intangible qualities that lifts good teachers and makes them great.

This film explores the teaching profession as a life calling. Musician Glenn Holland accepts a temporary position in a school as a music teacher in order to compose his 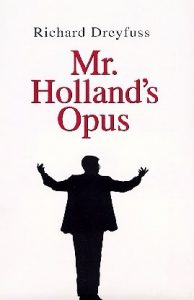 masterpiece and to pay his bills. But life has other plans as his musical masterpiece is relegated to the backburner and Holland gets drawn into his new profession. He soon realises that teaching music is his destiny. The film charts 30 years of Holland’s life as a teacher, through his triumphs and tragedies.
From fighting government budget cuts on the arts in school, to inspiring and supporting his students – even those who have no musical talent – Holland’s commitment to music and teaching is complete. Yet at the end of the day Holland is human and has an emotionally wrought and difficult relationship with those closest to him. Holland’s son Cole is diagnosed as deaf and he realises that he will never be able to appreciate music which his father is so passionate about.
With a rich, layered plot it is hard to believe that this film and Mr. Holland’s character are both fictional. Entertaining and unforgettable.

LouAnne leaves the Navy and starts teaching at a school in a low-income, depressed 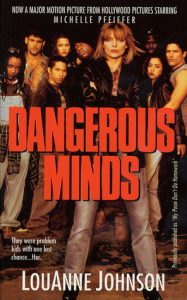 area without being aware of the kind of class she will be teaching. In school she is confronted by angry teenagers who come from lower class backgrounds and are involved in gang warfare and selling drugs. They reject all of LouAnne’s initial attempts to teach them.

Not one to give up easily, LouAnne decides to stick it out and reaches out to her students by adopting the street language and idiom that they are familiar with. She also wears a leather jacket to school in order to look ‘tough’.  She introduces her students to poetry and employs radical methods to motivate her students, which they love. However, her teaching methods do not sit well with the school’s management, which wants LouAnne to focus on the curriculum.
Tragedy strikes when one of LouAnne’s students is killed and she decides to leave her job. Based on a true story.

Taking inspiration from the relationship between the blind and deaf girl, Helen Keller and her teacher Anne Sullivan, Black brought together the eccentric teacher Debraj Sahai (Amitabh Bachchan) and his deaf, blind and mute student Michelle (Rani Mukherjee), to create magic on the screen. 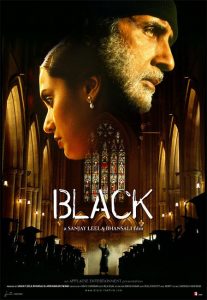 to teach his unruly student, who lost these vital senses after a childhood illness. The student-teacher relationship between Debraj and Michelle begins on a difficult note and faces several roadblocks. Eventually out of a moment of crisis, the teacher and the student have a breakthrough when Debraj manages to help Michelle make the connection between words and their meanings. Under Debraj’s tutelage Michelle begins communicating with her family. Debraj’s painstaking efforts and Michelle’s growth into a functioning human being is remarkable to watch. Eventually Michelle ends up enrolling in university, which poses frustrating challenges of its own.

Things come full circle when Debraj is faced with his own set of trials as his mental functions begin to decline rapidly. That’s when his student Michelle returns to reach out to him.

Three Idiots is a satire on the education system in the Subcontinent. The film is set in an engineering college that prides itself on excellence and attracts the best talent from around the country. The principal of the college frequently reminds his students – often graphically – that they must “compete or die.” It is in such a scenario, that three students meet and become lifelong friends.

Even though the college harbours the best talent in the country, it restricts freedom of thought and discourages questions. Instead there is a hardnosed focus on academic achievement and grades. The pressure is so severe that one student ends up committing suicide.

One of the three friends, Rancho (played by Aamir Khan) is the protagonist, who 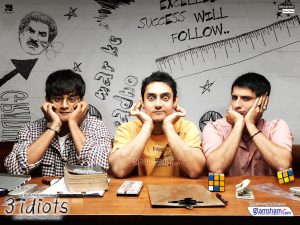 frequently questions his teachers and has a natural curiosity that gets him into trouble regularly.  He boldly questions a system where students are expected to conform, put their noses to the grind and attain grades in a machine-like manner.
In one defining moment in the film a teacher asks the class to give the definition of a machine.  Rancho responds by saying that “a machine is anything that reduces human effort.” Dissatisfied with the answer, the teachers turns to Rancho’s arch enemy, Chatur to define a machine and receives a rote-learned definition that satisfies him.

Rancho’s friends, Raju and Farhan also play significant, well etched roles. Both Raju and Farhan come from different backgrounds and are under immense pressure from their parents to do well and land the right jobs. It is clear to the audience that they are essentially suppressing their natural desires in order to conform and fulfill their families’ dreams.

The film explores the prevalent belief that you have to kill the competition in order to secure your place. Another theme that Three Idiots tackles is how narrowly society defines success – in this case gaining a degree from a prestigious college and landing THE job, all at the expense of an individual’s true desires and real talent.

A must watch if you think the system of education needs a serious rethink.

Ishaan, the protagonist of the film is a young boy who is regularly ridiculed in school for not being able to read or write. His parents blame him for not trying hard enough and his teachers frequently express their frustration with Ishaan’s lack of ‘ability’. To make matters worse, his elder brother is a star student. Ishaan on the other hand is considered ‘stupid’ by everyone and has telltale problems, such as 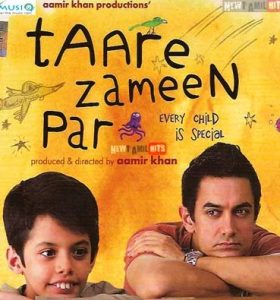 difficulties with tying his shoelaces and his school tie. Ishaan also acts up frequently to express his frustration and spends most of his time in class daydreaming. No one seems to recognise that the boy is suffering  and that he has a learning disability.

After Ishaan receives a particularly bad report in school, his parents pack him off to boarding school – a heart wrenching decision for both Ishaan and his parents. At the boarding school, a new art teacher Nikumbh (played by Aamir Khan) notices Ishaan’s reluctance to participate in the class. He reviews Ishaan’s notebooks and recognises that the boy is dyslexic. Nikumbh travels to meet Ishaan’s parents and explains to them where their son’s behavioural and academic problems are stemming from.  Nikumbh explains to Ishaan’s parents that since he is dyslexic, his mind processes information differently. He stresses that Ishaan is not retarded, he is just different. Nikumbh recognises Ishaan’s artistic talent and works with him as a personal tutor using remedial techniques to help him improve his grades in other subjects. In one scene he also explains that many high achievers are dyslexic.

Eventually Nikumbh helps Ishaan develop his artistic abilities and helps him blossom as an artist. An eye opener for both parents and teachers.

Shahrezad Samiuddin works at TRC and has written for Dawn, Aurora, The Herald and other publications. She has also co-authored a book for young readers on Pakistan for the Cultures of the World series, titled ‘Pakistan: Castle with a Thousand Doors’, for  a Singapore-based publishing house. She is interested in TV and films and the entertainment media in general, and enjoys writing about it.