1982: A group of concerned educators. A simple belief in one’s ability to influence change – this intermingling bore the seed for the creation of Teachers’ Resource Centre (TRC). That bears some clarification though. For the individuals behind our organization, this wasn’t just a conviction in themselves. Rather, they held that if teachers in Pakistan’s schools believed in their power to make a difference, it would revolutionize our education system. This idea first took shape in Workshop’82 – a series of in-service training activities with 120 participants from 30 schools. The response was overwhelmingly positive. From such encouraging feedback came the impetus for a more enduring movement.

1984 brought together an even larger group of educationists from the public and private sector with the common will to tackle the shortcomings in our county’s education system. This collective resolve gained momentum with the Aga Khan Foundation, South Asia Partnership and Canadian International Development Agency putting their financial weight behind it.

In 1986, TRC, the first institution of its kind, was established. Initially, its members committed to offering in-service education and educational materials to school teachers in Karachi. Over two decades later, this commitment has extended as far as Tharparkar, Quetta and Gilgit, encompassing contributions to education across Pakistan.
Of course, while TRC’s founding ideals were inspiring, they were still in their infancy. Like the children who are the focus of its work, TRC would have to be nurtured. Amidst a first year fraught with curfews and the shutting of educational institutions in Karachi, TRC trained personnel, built systems and professionalized its activities. Due to the larger uncertainty in the city, its impact, while refreshing, was on a smaller group than envisaged. Far from disheartened, its members launched themselves with renewed vigour into refining their vision for TRC over the coming years. This teething process involved pioneering initiatives in several different directions with accountability, introspection and improvement as its undercurrents. On one hand, staffing shortages, fundraising and bureaucratic delays challenged the sustainability of TRC. The other, brighter side of the spectrum brought with it promising returns on TRC’s efforts to enhance the teaching profession through public-private collaborations like participating in government education committees and leading a national UNICEF training on First Language Learning in Islamabad.

Workshops addressing different aspects of classroom teaching rose dramatically in number, enabling more and more teachers to benefit from TRC’s professional development work. Sprinkled into these initial years were several publications, a weeklong book festival to promote reading and an exhibition of school supplies to name a few projects. Publications piloted in TRC’s initial stages included Alif Ujala ‘a highly successful environmental education magazine funded by WWF-UK, Funline‘ a children’s magazine in collaboration with Newsline and a quarterly newsletter which has continued into the present (and is now the bi-annual Ilm o Amal)

1990: TRC entered the 90s with a resounding ‘Yes we can!’ A new governing body was voted in. Early Childhood Education came to the forefront of its efforts – a focus that would go on to produce some of TRC’s major achievements. Public-private partnerships, a cornerstone of educational progress, got yet another boost with Initiating Change through Professional Development (ICPD) – TRC’s first commitment to in-depth, multi-year work with government schools. This commitment would become a springboard for TRC to become a vital agent of change by later developing delivery models of education in pre-primary and primary levels for the public sector. This spirit of collaboration added another colourful dash to the mix with Tomorrow’s World, TRC’s annual event of 1998 which brought together over 30,000 people from all walks of life to consider, how the choices they make today will shape tomorrow.

TRC’s pledge to make its impact universal continued with the development of the ECE readiness bag (later renamed Pehla Taleemi Basta) as a start-up school kit for low-income schools. This pledge assumed a different face with the donning of yet more ‘advocacy’ hats through annual celebrations of Earth Day, Universal Children’s Day and highlighting, related educational and social causes at our Annual Events. Hop over to our ‘Special Events’ section for further details! 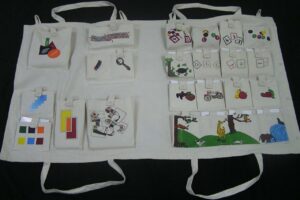 The 90s also saw TRC make more ‘academic’ headway by assuming a greater presence in educational research in Pakistan. Members were asked to lead studies on teacher training and rural development commissioned by organizations including the World Bank and Save the Children-UK. The Aga Khan University Institute for Educational Development (AKU-IED) asked TRC to design and teach a six-week module for its M.Ed programme. The Pakistani government asked TRC to participate in several task forces on education – the first glimmers of TRC being endorsed as a national leader in education, a decade into its establishment.

2000: A resounding ‘vote of confidence’ from the Pakistani government would come at the turn of the century with the formalization of Pakistan’s first early childhood education curriculum (2002) – an achievement for the history books, with TRC as the driving force behind it! Early childhood education stepped up to the plate yet again with TRC establishing a formal certificate course in ECE in collaboration with Sheridan College and Ryerson University in Canada, which premiered in August 2005.

TRC’s first website was formally inaugurated in 2001, to coincide with TRC turning 15, coupled later with the addition of a second website Interact. Amidst the global clamour of 9/11 and ensuing events in subsequent yea rs, TRC extended its work by exposing its staff to policy level conferences and technical working groups, spreading environmental awareness and launching the Media Literacy Initiative in 2006. It continued to give back through the ongoing development of interactive materials for teachers and parents, including a 2003 calendar focusing on the value of play, in an attempt to revive traditional games at home, promote cooperation over competition and reduce consumerism. Ilm o Amal, TRC’s latest publication premiered in 2005 and remains a popular resource in classroom planning for teachers.

On January 22, 2007 the newly established TRC-Institute of ECE was formally registered under the Societies Registration Act, XXI of 1860.

August 2007 ushered in a move to a new premises and a new logo for our organization. With its arrival at the dawn of our 21st year, the new TRC logo ‘a tree’ embodies the essence of our philosophy, which has always been a force of life, knowledge and enlightenment. Lets not forget that TRC was born from a seed – a concept that has grown and evolved over the years into the inspiring, imaginative force that it is today. TRC empowers teachers to tap into their inherent potential and the tree symbolically represents the enabling environment that TRC provides.

And what of TRC’s favourite medium of service to the education community ‘ its workshops.’ Well, quite simply, we believe in activity based learning within a non-threatening learning environment. We are committed to offering ideas that are not limited by resources and can be implemented widely. They promote environment friendly ideals through the recycling of junk materials to make teaching materials and aids. Curious? Sign up for one!

Over 20 years ago, TRC emerged as a meaningful undertaking in uncertain times when our country was in want of guidance. Over the last decades, it has led the advance in improving literacy prospects in our country. Through its monumental work, it has inspired the hearts and minds within it to continue their groundbreaking outreach to enhance the state of education in Pakistan. Today, we find ourselves in equally troubling times with Pakistan still needing hopeful, practical solutions to its myriad of problems, education being the foremost. TRC is up for the challenge.

Since its inception TRC has gathered several firsts under its belt and our Media Literacy Programme is another one of such pioneering steps. Staying abreast of contemporary trends, TRC incorporated media literacy as part of a broader definition of literacy in the 21st century. In April 2009 as a first step, TRC conducted a workshop on Media Literacy. The workshop was very successful in sensitizing the participating teachers to the impact of media in our lives. Apart from media literacy workshops, TRC’s Film Club, which was launched in 2006, is another arm of our Media Literacy Programme. The film club regularly screens feature films to enhance learning and teaching experiences.

Later, in July 2009, TRC and the EDO Education, City District Government Karachi signed an MoU to formalise their working relationship and start the process of strengthening the katchi class in 40 public sector schools. This partnership is supported by the Releasing Confidence and Creativity (RCC) project, which is a multi partner initiative to strengthen ECE in Pakistan and is coordinated by the Aga Khan Foundation Pakistan. Through this initiative TRC is playing a key role in strengthening public sector capacities for initiating and up-scaling ECE in other government schools in Karachi.

In August 2009, TRC also formally announced its commitment to reducing its carbon footprint and took some radical steps towards that. While TRC has amply demonstrated its commitment to saving the environment through the years, this was the year when we made an effort to promote a paper-free environment. TRC stopped printing its annual report, Ilm o Amal and workshop circulars. Now all of these are accessible through TRC’s website.

The next year saw us downsizing the TRC library. While in its initial years the library was one of TRC’s mainstays, its utility had diminished considerably due to various factors such as difficult commutes and the proliferation of the Internet. Thus downsizing the TRC library seemed like a natural step and so in 2010 TRC shed much of the library’s stock and sold the discarded material, donating whatever remained to low-income schools. We now operate a considerably smaller library for students, the TRC-IECE faculty and members of our training and development team.

An initiative by the USAID-funded ED-Links brought TRC the opportunity to display its expertise through the development of interactive self-learning materials in 2011. Three interactive digital CDs, The Magic of Math, WordTopia and The Science Discovery Centre, which are Mathematics, English and Science CDs were developed by TRC for secondary school in 22 districts of Sindh and Balochistan and Islamabad and FATA. By developing the CDs TRC had become a central contributor to a project which can have very far-reaching influence. The animated CDs will be used by students in grades 6-8 in the project schools from the public sector.

In September 2011, the TRC-Institute of ECE achieved a major milestone. After four years of correspondence and dialogue with the University of Bradford, TRC-IECE signed a validation agreement with them. Under the agreement students who complete the ECE–Certificate Programme will receive an award from the UK-based University. The award is an internationally recognised certificate of Higher Education in ECE.

This is a significant achievement for TRC-IECE, which is still in its formative years. What is even more heartening is that the programme that has been developed with a focus on local cultural sensitivity has been validated without any modifications. September 2011 also marked the launch of the ECE-CP in Urdu, which was initiated after a single-minded effort by the TRC team in translating and adapting the course outlines and the teaching and learning resources. The Urdu programme will expand the reach of the programme considerably.