When TRC was established in 1986, one of the objectives was to organise theme-based annual events. We hoped that these events would bring together member schools, students, parents and all those who contribute to, or are interested in education, and that they would work together and share resources, ideas, experiences and expertise. With time, as TRC’s scope and impact increased, the audience for the events increased exponentially. In 1987, there were about 3000 visitors over three days, and in 1995, it went up to approximately 7000. By 1998-99, the number of visitors had grown to an astounding 30,000 … totally unexpected and almost impossible to manage. We were all frazzled at the end of each of the three days and then there was always the cleaning up, sorting and documenting to do.

The number of people and time required to organise these events went up by leaps and bounds, and the increased funding became more difficult to procure. We were absolutely clear that entry to the events would be free for children and families, as these were not fund-raising events. In fact, TRC’s annual events were designed as “edutainment”, which would foster cooperation and collaboration, and that there would be no competition between schools or students.

After 1998, these annual events could no longer be held annually … we then began calling them Special Events! In 2001 we had planned an elaborate event “Celebrating Communities” in which all of us – schools, teachers students and TRC had invested enormous amounts of time and energy. The process was completed according to plans, but owing to 9/11, the three day event had to be cancelled at the last minute. Owing to the insecure environment we now live in, we hav 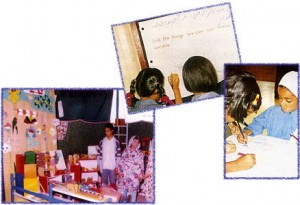 e had no events since. The risk of having 30,000 children and their families under one roof is one we are not willing to take.

When we reminisce about our events, it immediately conjures up excitement and images of intense activity and energy involving and engulfing us all. For those members of our team who came on board after 9/11, the annual event experience remains a mystery.

If you want a glimpse into some of the events, click on the links below to read brief descriptions and see a few photographs. There is also an archive of events.