Ask a reluctant writer to put pen to paper and he may come up with what are ironically the most creative reasons to avoid doing so. In this month’s Ilm o Amal, Lynette Viccaji explores the reasons certain students are reluctant to write. She takes a leaf out of her own training days and comes up with the key to getting students to willingly take on the task of expressing themselves.

Almost twenty years ago, I taught English to Class 6. Once, the topic was ‘Friendly Letters’.  The students were instructed to bring letter paper and envelopes to school the next day. There were two sections of the class, A and B, and section A had their English period first. I put the names of all the students of section B into a basket and asked the students of section A to each pull out a name.Clé de produit Windows 8 Professional
Now they were instructed to write a letter to the student whose name they had drawn – a real letter, saying anything they wanted to. Instructions for format etc. were put on the board. Soon, every child was either writing busily, or chewing her pen as she thought about her next sentence. Almost every face wore a smile as the writer anticipated the reaction of the recipient to what she had written. When they had finished, they folded the letters, placed them in the envelopes, sealed them, and wrote the name and address of both the sender and the addressee.

When I went into section B later in the day, I ‘delivered’ the letters and watched the excitement with which the letters were opened and read. Now these students were given the format and asked to reply to their letters, which I would deliver to section A. They eagerly complied. And thus, quite painlessly, the required topic was covered.

For the teacher of writing, this little experiment illustrates an important principle: a writer needs a reason for writing – a 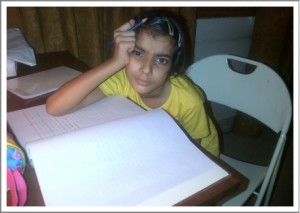 reason other than the fact that this is a class exercise that has to be completed because the teacher says so. In this case, the reason was quite compelling: their letters would be received, read, and responded to. Even formal letters can be made ‘real’ by actually sending them to the persons or organisations addressed. Letters to the editor can be about matters of real concern, such as environmental pollution or traffic violation which the children see every day. Letters of complaint can be sent to stores or restaurants, complaining of sub-standard goods or services, or expressing appreciation for excellence, again based on real experience. This will also create civic awareness and a sense of empowerment. The teacher can correct the first draft and then have the students copy out the final version neatly. This will also ensure that they pay attention to the corrections made, instead of just looking at the marks at the top of the page and comparing their own with those of their classmates!

Other practical writing tasks are:

• Reporting an event or incident: Look for something that actually happened, either in school or at home. Unlike friendly or formal letters, these tasks will probably have to have an imaginary audience and purpose, unless the creative teacher can think of real ones!

• Giving instructions and directions: Again, try to think of ways to make these authentic. One suggestion is that students work in pairs. Each student writes a set of instructions, which her partner then has to carry out. If the task is performed successfully, the instructions were clear.

Of course, in an exam or test, the audience and purpose will have to be supposed ones, but hopefully, by this time, the students will have enough skill and confidence to be able to tackle the set task.

The same principle, which is to have a reason for writing, applies to creative composition. I have found that keeping a journal 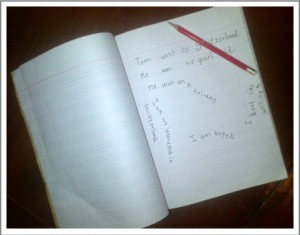 or diary is an excellent impetus. During my B. Ed year at Notre Dame Institute of Education, our English teacher, Noreen Reynolds, asked us all to keep a journal. In it, we were to record not just happenings, but thoughts, feelings, interesting quotations, as well as a commentary on whichever book we were reading. Yes, we were supposed to always be in the process of reading a book. When we finished it, we had to start another. I would like to digress here and state that in my opinion, the single most important way to improve your language skills is by reading. Ask any Language teacher to pick out the students who do well in the subject, and you will find that 99% of them are regular readers.

Once a week, we would submit these journals to our teacher in the morning, and she would read and return them to us by the end of the day (5 PM) or the next morning. No corrections were made; these were our private musings, not to be interfered with by the teacher, for that would inhibit us. However, there would always be a written response in the margin or at the end, just a chatty or thoughtful comment on what we had written. I still have the journal, which was written almost twenty years ago. It records some very interesting experiences, and as I read Noreen’s remarks, I can hear her voice, having a conversation with me.

I lost no time in putting this excellent method into practice when I was teaching English to class 11. It was a great success. Hesitant at first, the girls were soon pouring out their observations and feelings. Then I had the idea of keeping a journal myself, and leaving it on the desk one day a week for them to read. How they enjoyed that! Some cheeky ones even wrote remarks in it.

Journal writing must be handled with caution and sensitivity. Confidentiality is paramount. Most students will be discreet in what they write, but some do tend to reveal their innermost thoughts and feelings, especially if they like and trust the teacher. Never criticise, admonish or show that you are shocked. You can either respond positively or not at all. Don’t expect 100% cooperation, as some students will be more regular than others. You could ask students to voluntarily read aloud excerpts from their journals to the class, to encourage the less enthusiastic ones.

The main advantage of journal writing is that it gets students to write fairly regularly. The two secrets behind its success are: 1) the topic is irresistible: oneself. Everyone is the centre of his or her own life.  2) There is no fear of criticism or correction to inhibit the creative flow. Best of all, the students will have something to look back on in later years – a portion of their youth.

The habit of translating thoughts into words is then carried over into other types of compositions, such as descriptive, narrative, expository and argumentative. In class tests and exams, topics are set for the students; however I feel that they should always have several topics to choose from, to allow for individual tastes and talents. As far as possible, students should want to say what they are saying – and that is the most effortless and effective way to engage the reluctant writer.Windows 8 Clé

Ms Lynette Viccaji is an A-Level teacher and Head of the Department of English Literature at the Lyceum School. She is also a lecturer at the Notre Dame Institute of Education. She has been conducting workshops at TRC for over 17 years, and has been a local consultant to Oxford University Press.