Drawing and Memory: A Research

An important new research has revealed that the simple act of drawing can help boost students’ learning. In this month’s Ilm o Amal, TRC staff examines the salient points of the University of Waterloo research and its conclusions, and also explores how you can incorporate drawing in your lessons to help your students benefit.

A new study confirms something some of us may have known for a long time: drawing can help improve a person’s memory. The simple act of drawing helps engage a person’s brain in many different ways, namely visually, kinesthetically and semantically. At the University of Waterloo in Canada, researchers conducted a study on this phenomenon and found that when people drew the information they had received, their recall nearly doubled.

During the experiment, a group of undergraduate students were asked to study a list of items. The list contained common terms such as ‘truck’ and ‘pear’. After studying the list, the students were asked to recall the terms they had seen and make another list. They were given the option of either writing down the words or illustrating them from memory. The study found that participants who wrote down the words could recall 20 percent of the terms from the list. However, those who chose to draw the items on the list recalled about 45 percent of the terms. More than double that of those who wrote down the words.

The researchers followed up this study with another experiment in which they compared the process of note-taking. The 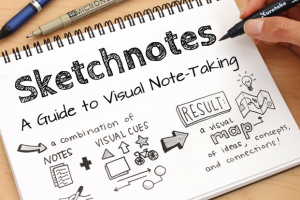 research focused on students who wrote down words to explain or understand a concept versus those that drew the concept. Scientists concluded that drawing was “an effective and reliable encoding strategy, far superior to writing.” They also found that the recall of undergrads who drew scientific concepts while taking notes –concepts such as spores and isotopes – was twice as good as that of those that wrote down the definitions given to them during a lecture.

It is not about the drawing ability

It is important to state here that the drawing ability of a student did not have an impact on his or her ability to recall. Those who were not able to draw well, but still drew to illustrate a concept were able to boost their recall rate, regardless. This suggests that this strategy can work for all students and not just for those who are able to draw well.

Scientists conducted a total of eight experiments, and concluded that drawing is a “reliable, replicable means of boosting performance”. The University of Waterloo researchers also explained that drawing is so powerful because it requires “elaboration on the meaning of the term and translating the definition to a new form (a picture).” Essentially, when students listen to a lecture or see an image, they end up absorbing information in a passive way. On the other hand, when they draw what they are learning, they are forced to tackle the information and reconstruct it in a way that they can understand it.

Talking about the process of drawing a concept, researchers said, that when a student illustrates what he or she is learning, they “must elaborate on its meaning and semantic features, engage in the actual hand movements needed for drawing (motor action), and visually inspect [the] created picture (pictorial processing).”

The importance of memory and connections

A trained teacher has an understanding of how the brain works. She knows that a memory becomes stronger in the brains when it has many connections to other memories. At the same time as strengthening some memories, the human brain is also making a constant effort to get rid of information that is not used. Hence the more (synaptic) connections a memory has, the less likely it is to be forgotten. 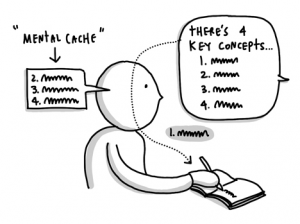 A student who draws the information he or she receives also encodes the memory in a very rich way. He or she layers the visual memory of the image, the kinesthetic memory of his or her hand drawing the image, and the semantic memory that is engaged when the brain is involved in meaning-making. Effectively by engaging multiple modalities –visual, kinesthetic and semantic – the students processes the information in three different ways and effectively ends up learning it three times, strengthening its recall.

Teachers can incorporate drawing in their lessons and help boost our students’ learning in the following ways.

Creating learning aids: Instead of using preprinted posters of maps and diagrams, ask your students to create them.

Drawing Notes: Discourage students from taking down notes word for word. Instead, encourage them to be creative. Hence, if they are taking notes on one side of their notebooks, they can use the other side to illustrate a concept or topic in the form of diagrams and flow charts.

Encourage Visual Data: Give your students plenty of opportunities to collect, analyse, and present data in visual form. Ask your students to present information visually, regardless of the subject they are studying. Visual concepts can be presented across the board in all subjects whether the student is studying Math, Urdu and Physics.

Assessing learning through art: If you want to really incorporate drawing in your lessons, give your students an assignment in which they show their understanding of a topic through art.

Encouraging your students to draw can provide a powerful boost to their learning. By challenging students to grapple with a topic in different ways, drawing can really enhance recall.