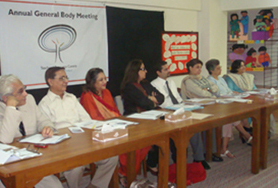 Our AGM for 2008-2009 was held at the TRC office on Saturday, December 16, 2009 at 3:00 p.m. It was attended by members of the TRC Board as well as representatives of member schools. The Director highlighted the achievements of the year and shared TRC’s future plans. Members were encouraged to continue their support to TRC and to give constructive feedback on its services.

What’s been happening at The TRC-IECE

Term 1 of ECE-CP’s 2009-2010 session has almost come to an end. Our fourth cohort of students for this year draws from a diverse pool of both pre-service and in-service teachers. This combination of backgrounds has enriched discussions in the classroom and challenged the ECE-CP faculty to continually support engaging dialogue about issues and perspectives within ECE.

In Term 1, participants were enrolled in three courses; Child Development, The Learning Environment and Promoting Pro-social Behaviour – the triad of which establishes a meaningful foundation from which to explore equally pivotal areas of Play Experiences, Observation and Assessment, as well as the History and Philosophy of ECE in Term 2. The participants also completed field education placements and academic courses simultaneously – a requirement of ECE-CP which continues throughout the year to facilitate integration of theory and practice.

We are now busy getting ready for the beginning of the next term which promises to excite and extend our learning within the field of ECE. Kudos to our participants for engaging with the course content so enthusiastically thus far and consistently introspecting about their teaching practices along the way. We look forward to welcoming them back next week.

In the last quarter of 2009, we hosted two film club screenings. Though we had to proactively solicit participation, both were well attended. The December screening of Chak De had a mix of private and public school teachers and heads. The head teachers of our RCC partner schools from Korangi Town had an intellectually stimulating morning and requested for more in the future. Later we had calls from others who hadn’t been invited to lodge their complaints. Read more about the screenings: http://trconline.org/?cat=2

For Earth Day 2009, we invited member schools to make a pledge to work together when schools re-opened in August, on a ‘Green My School’ initiative aimed to create Eco Friendly schools. Three schools responded: The Indus Academy, PECHS Girls’ School and Ida Rieu School. To begin with, in September, the group decided to formulate Eco Mission statements and Eco Teams who would take the initiative forward in their own schools. We shared some sample eco-audits with the group to facilitate identification of areas to work on, individually, and as institutions.

Schools have formed their Eco Teams and Mission and have either completed or are in the final stages of completing their audits. The group will meet again in January 2010 at TRC, to move things forward.

Following an intensive period of education and training and a continuous cycle of “plan, do and critical review”, the junior section of the PECHS Girls’ School is now a happening place for children and teachers alike. This process took almost five years and now there is no looking back!

The principal has now tasked TRC with turning the senior section around. The current process began at the end of October 2009, with a discussion on why change is required and what the evaluation will entail. A week later, teachers filled out a ‘Conditions of School’ rating survey and a self assessment questionnaire. Discussions were held to give them feedback on the findings. A random sample of students from Classes 6 to 10 also participated in a survey to assess the conditions of school and students from Classes 4 and 5 participated in a focus group discussion in December to air their views about the senior school. Very interesting results!! In January 2010, we will be talking to a group of parents.

The MoE Requests TRC’s Help with the NCECE

The Ministry of Education Curriculum Wing, organised a three day review of the Urdu translation of the National ECE Curriculum (2007) from November 11-13, 2009, in Islamabad. TRC had translated the curriculum and now our representative, Farzana Kausar, sat with the review group to finalise the document. Following heated debates, the group finally arrived at consensus. The MoE is now responsible for the typing and completion of the reviewed content.

As part of the process of assisting our RCC supported, public sector partner schools to provide developmentally appropriate learning experiences in their early years’ classrooms, we organised parents’ meetings in four of the 40 partner schools, in December 2009. We began with Korangi Town. 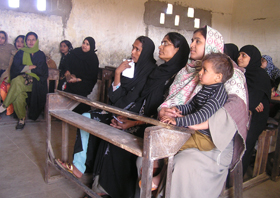 The meeting focussed on how children grow, develop and learn, and what is meant by active learning. We also talked about expectations at both ends: the ECE teachers expectations from parents (such as, giving healthy snacks instead of money to buy from hawkers, limiting TV viewing/sleeping early and letting the school do the teaching instead of sending them to tuition) and what the parents hoped their children would learn. Mothers shared that their children recite poems that they had learnt in school and that their language skills and confidence had improved by leaps and bounds.

The mothers and caregivers, such as aunts and grandmothers, who attended the meeting observed children working in the goshas (learning areas) and looked at the Pehla Taleemi Basta as well.

The mothers said that they felt really honoured and encouraged, as this was the first time that the school had invited them to such a forum. They were very happy with the active learning approach and some said they had moved their children from local private schools to this government school.

Meetings in the remaining 36 schools will be held in the first quarter of 2010.

December brought several requests for collaborations from donors and NGOs.

• Pre – Step asked us to respond to their Request for Proposals for training partners to work with GCETs. The long term goal of Pre-Step is to improve classroom teaching throughout the education system of Pakistan. We gave this request a great deal of thought, but had to regret in the end.

We have received a request from SCUK to develop a capacity building education programme for TRDP staff so that they can support teachers, in order to enhance the quality component for working children in non-formal education centres. A needs’ assessment visit is scheduled for January 05, 2010, after which a final agreement will be made.

Sudhaar, a Punjab based NGO established in 1995, has proposed TRC as “technical expert ” in a recently submitted proposal to PLAN International, for the establishment of ECCD centers in 3 districts: Chakwal, Vehari and Islamabad slum areas. Their CEO visited TRC to request a partnership. We have agreed in principle and will move forward if their proposal is accepted by PLAN.

Tariq Khan, Education Specialist and Katie Donahue, Deputy Director, Education Office, visited us to discuss education projects in Pakistan and to solicit our perspective on what works.

VM Public School, managed by the Rangoonwala Trust, decided to revamp their pre-school and asked TRC for advice. We suggested that they follow the National ECE Curriculum, after which a group of 12 of their pre-school teachers attended our 50 hour ‘Active Learning’ workshop. We changed the delivery model for this school-based workshop, conducting three hour sessions thrice a week, starting in October and ending in the beginning of December 2009. We will begin classroom support in February 2010 and also conduct one session on Team Teaching.

We decided it is high time we integrated our two websites: trconline and Interact. trconline was launched in 1995 on our 15th birthday and we are very attached to the look and feel of the site. Those were the days of html … Interact uses the WordPress platform and is much easier to use and manage. We finally gave in and in November 2009, began in-house content reviews and discussions with our technology partners b.i.t.s. We now have a couple of site maps/wireframe options and will soon give them the green signal to begin. We have seriously considered a smooth transition but will need all of you to sign up for updates once again. We apologize in advance for the inconvenience.