The period between July and September 2017 was a productive one for TRC. We were actively involved in training sessions for the Badal Do! Project, which engaged schools and teachers, equipping them with tools of inclusive learning. These were large scale trainings and our core team of trainers took on the challenge with great success. Our Early Childhood Education and Development Programme (ECED) is currently being revamped and the content is being updated to keep it abreast of global changes in ECED. The updated programme will be launched in January 2018. Meanwhile, TRC’s workshop programme continued to offer a wide range of sessions on topics as diverse as school management and improving reading skills in the primary classroom to teachers.

Our team was also busy following up on ‘The Thinking Classroom’ Project. Two teams visited master trainers in Azad Jammu and Kashmir and Baluchistan. As part of the follow-up, the teams interviewed the master trainers/teachers who had been trained during ‘The Thinking Classroom’ project to evaluate their understanding and use of the training content and the resources developed under the project. It was heartening to see some of the master trainers actively using what they had learned under the project to create vibrant learning spaces in their schools. Such examples serve to restore our faith in the work that we are doing. Both teams also had meetings with education managers at provincial and district levels in AJK and Baluchistan.

TRC’s training team also trained 55 teachers on ECED for the British Asia Trust (BAT) under the ‘Strengthening ECE Provisions through Peer to Peer Learning in Government Schools’. This hands-on training was conducted at the TRC premises and the participating teachers were given a resource kit especially developed for the project. The kit included a teachers’ guidebook, a young facilitators’ activity book, and two compilations of stories and poems for young learners that were developed in-house by TRC.

Throughout the reporting period, TRC’s team continued to work hard, reaching out to teachers and educators in the public and private sector and working towards our goal of enhancing the quality of education through teachers’ professional development.

TRC is on Facebook! This is where we share ideas, tips and news with our online teaching community. It is a space to learn new ideas, share experiences and stay informed about all the latest happenings at TRC.

The Badal Do! Project

The Badal Do! Project activities were ongoing in this reporting period. Trainings for cohort 2 began in July 2017 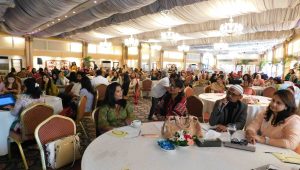 and will end in November 2017. TRC is leading the training component in the consortium and training started on Day 1 of the project with a session for 200 teachers. The session was conducted by TRC’s core team of trainers.

During the reporting period, Badal Do! trainings were conducted by the other consortium partners, Azcorp Entertainment, Children’s Museum for Peace and Human Rights, The Society for International Education and The School of Writing. TRC’s Badal Do! trainings will culminate with session 8.

In addition to the training of cohort 2 teachers, a Badal Do! Alumni event was held on September 20th, 2017 to 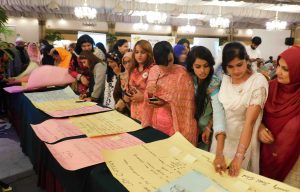 inculcate a sense of individual and collective responsibility to bring about change in society. The trained teachers of cohort 1 came together as a larger group to form an Alumni Association and take the Badal Do! philosophy forward. At the event teachers were encouraged to think about what they can do as individuals and in groups, to bring about peace and tolerance in society. During the reporting period the TRC team continued to attend Badal Do! consultative meetings to discuss the progress of the project and deliverables.

In July and August 2017, TRC successfully completed the development of training material for British Asian Trust’s 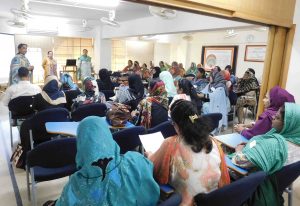 (BAT) project ‘Strengthening ECE Provisions through Peer to Peer Learning in Government Schools’. The training material included a teachers’ guidebook, a young facilitators’ activity book, and two compilations of stories and poems for young learners. The trainings of the selected ECED and grade one teachers was successfully completed in August 2017. The training was conducted for 6 hours a day every day for 5 days. A total of 55 government school teachers went through the rigorous ECED training programme which was held at the TRC premises. The trainings of young facilitators were conducted in September 2017. 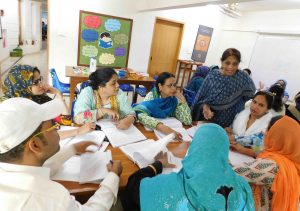 The training sessions for young facilitators (YFs) were conducted in school. A group of 25 to 35, grade 6 students were selected for the training from each school. All YFs were given a resource kit including a cloth bag, the training guidebook of activities, a storybook, poems, and stationery pack. The ECED educational kit (Pehla Taleemi Basta) was also disseminated to the teachers. Monitoring sessions to observe the young facilitators’ sessions with young learners are currently in progress.

From 11th September to 13th September 2017, TRC’s team (Farzana Kausar and Seema Yasmin) went on a follow-up visit to Muzaffarabad in Azad Jammu and Kashmir. The team followed up on master trainers who were trained by TRC as part 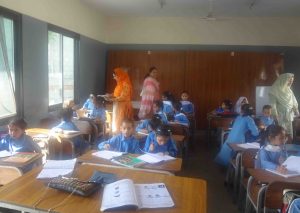 of Open Society Foundation’s ‘The Thinking Classroom’ project in November 2015. The teachers who had received the training of master trainers were interviewed to evaluate their understanding of the training content, the extent to which they had integrated higher order thinking skills in their lesson planning and classroom practices. Another purpose of the visit was to observe the extent to which the teachers were using the Resource Pack and TRC’s thematic lesson plans that were especially developed for the project. A total of 27 participants from different schools, training Institutes, and the curriculum wing of Muzaffarabad attended a 5-day training programme.

TRC’s team also met education managers at provincial and district levels to discuss the action plan in AJK, which was prepared during the National Consultative session in December 2016.

TRC’s Tabinda Jabeen and Saira Shahab visited Baluchistan as part of the follow-up for OSF’s ‘Thinking Classroom Project’. The team was following up on the Critical Thinking training of master trainers that was conducted in 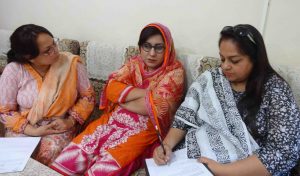 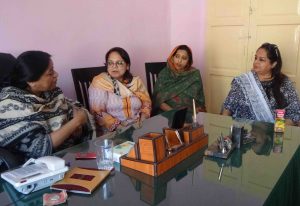 One of the master trainers, Zeenat Nisa had achieved impressive results. She was able to cascade the training by training 7 other teachers. Zeenat was self-directed and practiced CT strategies and the lesson plans in her classroom. She reported that her students were able to understand and complete the tasks. She found the lesson plans user friendly.

TRC’s team’s also met the DEOs Seemab Andaleeb and Muteeb Afridi and both were very supportive of TRC’s work. 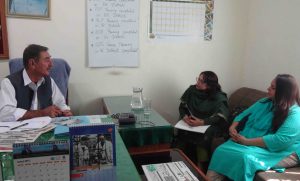 During a meeting with Director PITE, Muhammad Dawood Shah, TRC’s work was acknowledged and the team was assured of support in future.

On 5th August 2017, TRC conducted a workshop on “The Learning Process” for teachers from the Bismillah Government Girls’ Primary School. The government school is located in a low-income area of Karachi called Akhtar Colony. The participants were keen to learn, enjoyed the activities and remained involved throughout the session. The workshop was conducted in response to a request received from a teacher at the school who wanted to enhance her individual capacity. Observation visits to the school commenced in August and each visit was followed by a tutorial session of an hour for detailed guidance, supported with relevant material.

During the quarter, 4 workshops were organised titled ‘Teaching Novels and Short Stories’, ‘Critical Thinking: An Essential 21st Century Skill’, ‘Conducting Effective Workshops’ and ‘Promoting Reading Skills in the Primary Classroom’ which were attended by a total of 68 participants.

During the quarter, 2 courses were organised titled ‘Managing a Successful School and ‘Assessing and Evaluating Learning’ which were attended by a total of 29 participants.

TRC’s Early Childhood Education and Development (ECED) is a professional development programme for early years’ teachers that has been offered for the last 11 years. The ECED- Programme is currently being augmented and enriched to keep current with international standards. The programme of study is comprehensive and detailed, and yet inclusive to meet the diverse needs of in-service and pre-service teachers. Alongside developing and enhancing the programme, the TRC team is currently enrolling students for the next year. The next academic year of the ECED will commence in January 2018 and end in December 2018.

On 26th September 2017, TRC was invited to attending the launch of the 6th Provincial Annual Status of Education Report. The report’s findings of children’s learning levels, school enrolment and facilities of public-sector schools were shared at the event.
The chief guest on the occasion were the Minister for Education, Jam Mehtab Ali Dahar. Secretary Education, Abdul Aziz Uqaili was also present at the occasion.
The programme began with a welcome note by Mumtaz Peerzada from ITA (Idara-e-Taleem-o-Aagahi), an introduction of the panelists and the ILM Ideas2 (ASER Partner). Helen Kamal from ILM Ideas2 spoke about her organisation’s programmes and activities. Baela Raza Jamil, CEO ITA shared the findings of the report. She informed the audience that learning levels had dropped from 45 % to 37 % since last year and that girls’ learning levels for arithmetic were poor when compared to those of the boys. She shared that learning levels and school facilities are a major challenge facing education in Pakistan.
Baela revealed that there was an innovation in the survey, which included the data of children with disabilities in Punjab & KPK. This has been made possible because of a partnership with the Deaf Reach organisation.

The panelist Abdul Aziz Uqailee, Mr. Faisal Uqailee, Naheed Durrani, SEF, Nargis Sultana, OSF, Amina Syed, OUP, Dr. Farrukh Iqbal, IBA, Dr. Sajid, AKU, were requested to share their views and recommendations, which were:
• To work together and join hands for optimum results.
• To include Ethics and give importance to “Values”.
• To emphasise quality of education besides enrolment of children and teachers’ attendance.
• To organise data and ensure its authenticity.
• To work more on teachers’ training, development and capacity building.
• To select the right teachers for the right trainings.
• Implementation is most important.