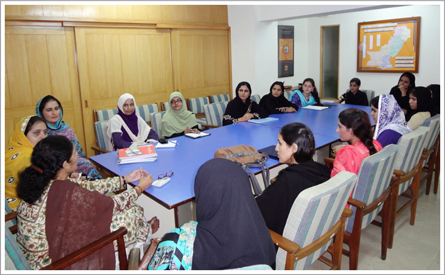 A group of 15 trainers and trainees from Infaq Education and Training Centre visited TRC in October 2011. The purpose of the visit was for the group to familiarise themselves with the teacher training programme carried out by TRC.

TRC’s Rubina Naqvi gave them a tour of TRC and made a brief presentation about the activities of our Centre. Their coordinator expressed her interest in organising training for a cluster of community schools in Korangi and requested TRC to meet the requirement. Details would be discussed once the written request is received.

The group appreciated the overall ambiance and board displays around the centre. 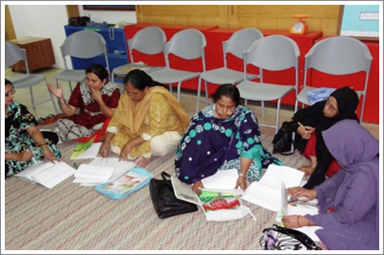 Two ten-hour workshops supported by the RCC project, were held for ECE teachers of our 40 public sector partner schools in Jamshed and Korangi Towns, on October 10-11, and October 12 -13, 2011, respectively. TRC’s Mehnaz Amir Ali facilitated the workshops.

Since the beginning of the project, the 40 teachers have been working on implementing the National Curriculum for Early Childhood Education, but were facing some difficulties in making connections between the activities of the six Key Learning Areas of the Curriculum. This workshop focused on helping them make links and view the curriculum holistically to understand that the six key learning areas are inextricably interconnected.

Interactive sessions and group activities were designed to help teachers break out of the habit of linear year long planning and dividing the curriculum into monthly schemes. The objectives were met to an extent; the teachers commented that they now understood the curriculum and its activities well and felt more confident in carrying them out. 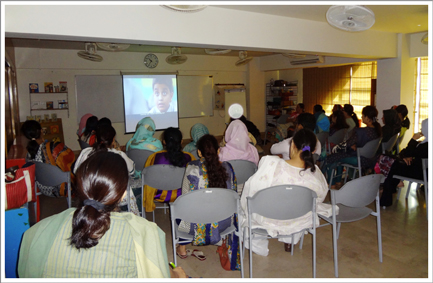 Public School, we had a full house.

Having viewed the ‘not far from reality’ film, the teachers were charged with emotion and were all set to engage in a challenging discussion. Some of the discussion questions were:

Who were Stanley’s role models?

What is the message we (as teachers) can take away from this film?

Songs play a very important part in our films, in the sub-continent.
What did the songs tell us? How were the songs used to convey parts of the story to us?

If you were to remake this film, what would you change? 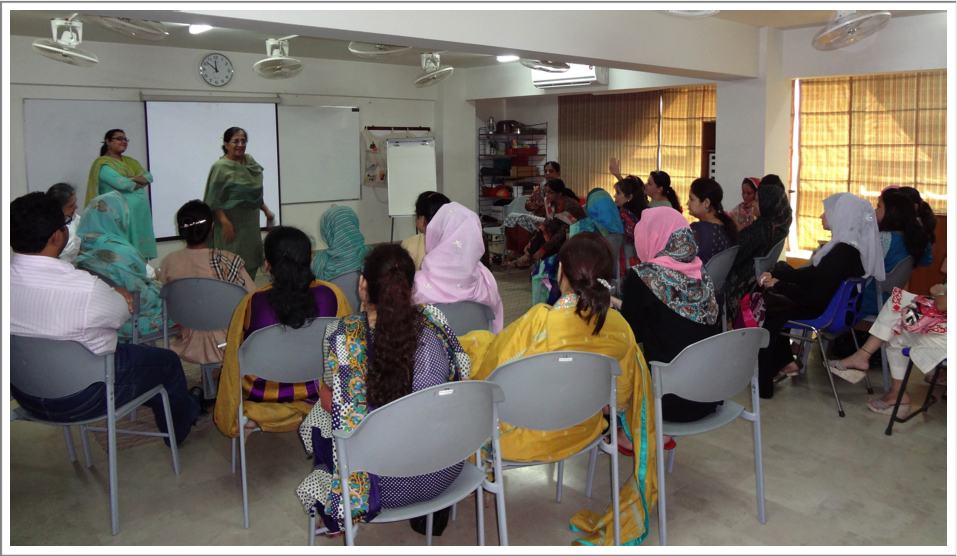 The responses from the audience were amazing, with some teachers speaking the cold hard truth about teachers’ behaviours similar to that of ‘Khadoos’ in the film. Bandura and Vygotsky’s child development theories were woven into the discussion to examine Stanley’s role models and the environment, which shaped him.

The collaborative concert in the film provided a ‘not to be missed’ opportunity to raise the contentious issue of competition, a much disputed matter at TRC. The participants were compelled to think critically about this aspect in our schools, and the negative impact of various competitive activities, on children’s social and emotional development.

Learning and Ecological Activities Foundation for Children (LEAF) requested us once again to participate in their annual Earth Watching Eco-Panel exhibition. TRC has been collaborating with LEAF over the last 10 years to share information with member schools about their annual theme-based art exhibition. Some of you may remember we have collected exhibits at TRC and forwarded them to Nishinomiya, Japan in the past. This year we shared the information directly with schools through our website; the submission deadline is December 31, 2011.

Do check this out:
http://www.chikyu-kids.net/

TRC participated in a two-day convention of the Pakistan Coalition for Education (PCE) in Islamabad on November 22-23, 2011. The convention brought together member organisations of PCE. Before the convention, the participants were engaged in a discussion on the Right to Education from a national perspective. Various speakers conducted thematic plenary discussions on Access and Quality, Educational Financing, Textbook and Curriculum, Girls’ Education and Parallel Systems for Educational Provision.

TRC’s Amima Sayeed led the discussion on Access and Quality. She said that quality of access cannot be further ignored and that until public schools ensure a learning environment that is conducive for students, parents will not send their children, especially when they have an option, which promises higher student achievement. She also talked about going beyond indicators such as, enrolment and teachers’ professional qualifications to determine quality since every year there are enrolment drives and thousands of training programmes which have little impact on the quality of teaching and learning in public schools.

Through participants’ input a charter of demands was also generated at the convention. The charter which highlights urgent and core issues in education, is now being reviewed and revised by the PCE Board and will serve as the venture point for advocacy and lobbying with legislators and parliamentarians. TRC also participated in the PCE board meeting following the convention.

Let’s Go to the Movies 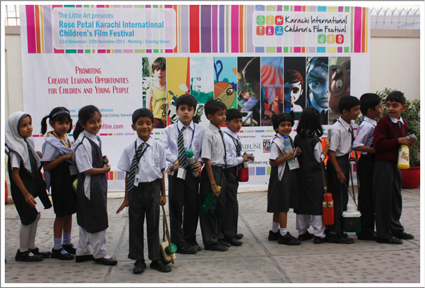 TRC and T2F joined hands to welcome school children from around the city to the 3-day Karachi International Children’s Film Festival (KICFF). From November 23 – 25, 2011, children giddy with excitement poured into the hall to watch a series of short films from around the world at the KICFF.

KICFF is a sister event of The Lahore International Children’s Film Festival. The LICFF was started by an NGO called The Little Art in 2007, and has seen an extremely successful run in the city of its birth. This year the LICFF held its third event and seeing it’s growing success collaborated with TRC and travelled to Karachi for another successful showing. The festival is driven by the belief that film is a rare medium that can combine wholesome fun and quality learning.

With 69 well-made and carefully selected films from 26 countries, for an hour the festival gave children a break from 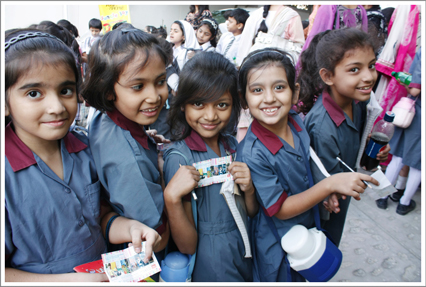 their regular diet of cartoons and Bollywood masala and whisked them to a world of films that were both entertaining and extremely effective in driving home wholesome messages. The selection comprised both animated and live action films. Among the more notable films was the heartwarming Gerald’s Last Day about a dog who is scheduled to die at a dog pound, unless he can convince someone to adopt him. Shhh …was an unusual film about a child who develops the magical ability with which he can erase irritating people from his life. Other films the children enjoyed were The Postman about an unusual relationship between a little boy and a postman, and the funny yet sensitively-handled Little Boy and the Beast about a child dealing with depressed parents. 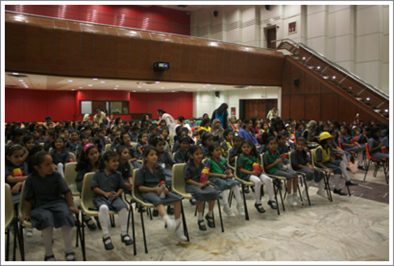 Festival tickets were sold at TRC, which was instrumental in involving several schools in the event. In the mornings, TRC provided support in managing the audience at the venue; T2F volunteers managed the evening shows. The event was an opportunity to reiterate TRC’s support of media literacy under which we run our film club. Our film club is a popular initiative under which TRC has screened several well-made films for heads of schools, teachers and school children to enhance the teaching- learning experience.

TRC and PCE Organise Policy Roundtable to Discuss the RTE

On December 13, 2011 TRC and PCE organised a policy roundtable to discuss the Right to Education Act, its implementation and Sindh government’s readiness. The purpose of holding the 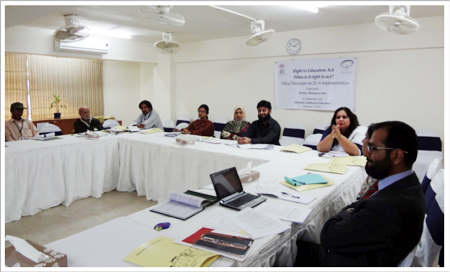 dialogue was to undertake a critical analysis of the 18th Amendment and its ensuing implications for the functioning of educational systems and the quality of teaching and learning. The dialogue also aimed to understand the requirements of RTE promulgation and implementation.

Participants agreed that for Sindh to implement the RTE, the first step would be to draft the law, which needs to be tabled and approved by the parliament.

The Director of Education, Karachi, Sajid Mallah said that the draft legislative bill should ensure that the educational cess is used for educational subsidies for the poor and marginalised. He also promised that the government of Sindh would engage the civil society to form a committee, which could lead to the drafting of the legislative bill.

The third ECE Technical Committee Review Meeting was held from December 13 – 15, 2011 in Islamabad. The objective of this meeting was to critically review and improve the Urdu translation of the Parenting Education Manual and Facilitators’ Manual, in light of the discussions and suggestions made at the last ECE Technical Committee held in September 2011. The translation of the Manuals had been done following the regional meeting in Bangkok in May.

Tabinda Jabeen represented TRC at this third meeting. The committee was also tasked with the preparation of draft outlines for a ‘Guidance Booklet’ for parents and teachers to study child development and ECE.

The participants worked in groups to review the two manuals and also worked on the draft outlines of the Guidance Booklet. They shared ideas and suggestions to make the booklet more useful for parents and teachers. The inclusion of contextualised photographs and illustrations and current useful child rearing practices in rural and urban areas was suggested. Highlighting the importance of health, hygiene and immunization was strongly recommended.

Our AGM for 2010 – 2011 was held at the TRC office on Saturday, December 17, 2011. Members of the TRC Board, as well as representatives of member schools attended. The Directors highlighted the activities of the year and shared plans for the future. Given that TRC had completed 25 years of service in teacher education, the mission statement was reviewed and a new draft was approved.

Hosted by the Provincial Institute of Teacher Education (PITE) Sindh, a one-day seminar on ECE in Sindh was held on December 29, 2011 at the Government Elementary College of Education Hyderabad. 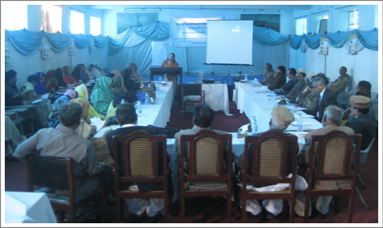 Mr. Atta Muhammad Detho, Director/ECE Coordinator (PITE) shared the objectives and Mr. Abdul Latif Siyal (PITE) delivered a presentation on the history and importance of ECE. Mr. Idrees Jatoi, Additional Director Curriculum, talked about the role of BOC in ECE Curriculum and Assessment. He acknowledged TRC’s initiative and efforts with regard to the National Curriculum for ECE. Mr. Shafi Muhammad Chandio from STBB Jamshoro, shared the guidelines for teachers of ECE. Ms. Tabinda Jabeen from TRC made an interactive presentation on pedagogical approaches in ECE; the audience shared their views and asked questions about the different ingredients of active learning. Mr. Santosh Kumar Kamrani from UNESCO delivered a presentation on Multiple Intelligences and also shared UNESCO’s future plans for disaster management and inclusive education in collaboration with the Special Education Department.