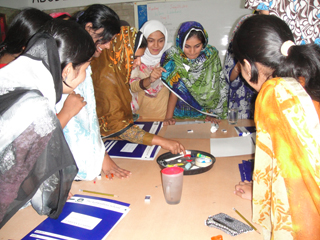 At the session, participating teachers were also introduced to the National Curriculum for ECE, which was developed by TRC in collaboration with the Ministry of Education, GoP, in 2002 and revised in 2007. During the six-day workshop, teachers learned to set up an active learning environment and how best to play their role in a child-centred environment.

It was exciting to see the participants comprehend the potential of active learning as many of the teachers discovered that ECE pedagogies could be adapted to meet the needs of children at the secondary level and above.

From July 26 – 28, a 3-day workshop titled Sabaq Ki Mansooba Bandi was conducted by TRC for teachers from the HOPE School. The workshop was conducted at Hope Secondary School, Zia Colony Korangi. TRC staff, Seema Yasmin and 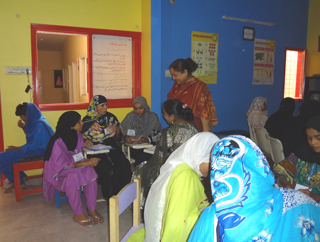 The workshop was designed to clarify the basic concepts of curriculum and lesson planning. A total number of 16 participants attended the training. This being a theoretical workshop, poems were incorporated, which livened up the training and kept the participants interested.

A ten-hour workshop titled Bachon Ki Behter Perwarish was conducted for head teachers of RCC partner schools in Jamshed and Korangi Towns on 27 – 28 July 2011. TRC?s Farzana Kausar and Tabinda Jabeen facilitated this workshop. The workshop was conducted to build capacity of the head teachers to enable them to raise awareness in their communities and convey important messages about child rearing practices, nurturing and taking care of young children. The contents of the workshop were Child 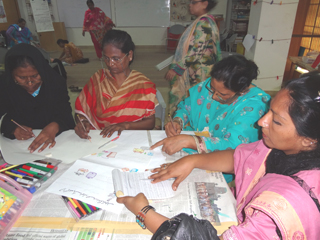 The participants designed posters and made pictorial messages. Some of the messages the participants came up with were ?Hifazati teekay, beemarion se tahaffuz?, ?Hum naye pauday laga ke mahol ko khushgawar bana saktay hein?, and ?Bachon ko baat cheet ka moqa dein aur unki baat ghor se sunein?. Different short stories and case studies related to the topics mentioned above were written to share with parents. The participants made action plans to hold workshops for parents in their schools in September and November 2011 and February 2012. TRC facilitators will also attend these workshops for support.

A 5-hour workshop on ?Management Styles of School Leaders? was planned and conducted by TRC?s Rubina Naqvi on 26 – 27 July 2011, at Reflections School for the management staff at different levels; it was attended by 24 participants.

The workshop focused on the concept of leadership in schools. The mission statement of the school was reviewed and its important aspects were highlighted. Participants explored the elements of professionalism and reflected upon their own management style through a self-profile. The value and stages of teamwork were emphasised and discussed in relation to the staff setup at the school. The sessions were interactive. Responses from the participants were candid and led to useful discussions on ways to resolve issues of coordination faced by them in managing the staff. The methods that were applied were questioning and interactive discussions, providing an opportunity for reflection as well as self-expression.

In response to a request from the Babaza Foundation Trust (BFT), a Professional Development Programme commenced in August 2011. From 8 ? 29 August, TRC staff conducted observations and gave feedback to teachers in order to improve the quality of teaching and learning in the primary classroom. The programme was based on classroom observations, followed by individual feedback.

To share the collective findings of the classroom observations, an eight-hour workshop was conducted by TRC?s Rubina Naqvi, from September 9 ? 10, for 16 teachers. The workshop was designed to focus on the good practices that had been observed as well as the areas that needed improvement. This workshop focused on lesson planning, active learning, effective questioning and English proficiency.

The sessions were meaningful and relevant, as they were built around actual examples from the teachers? own classrooms. This helped them to relate theory to their practice, and understand different aspects of the learning process.

It was heartening to see the responses and eagerness of the teachers to learn. It is hoped that the school reaches its goals and the trust is able to realise its vision of providing sound education to underprivileged children. A detailed report with findings and recommendations for further development was submitted to the trustees in the end of September 2011.

A second National Workshop was held in UNESCO?s office in Islamabad on 12 and 13 September 2011, to review the second draft of the Parent Education Guidebook and Facilitators? Handbook. Tabinda Jabeen from TRC attended this meeting. This time representatives from BRAC and Society for Community Support for Primary Education in Balochistan, also attended the National Workshop. This two-day meeting was sufficient to review the draft thoroughly. Members shared their comments and made suggestions about the different sections of the Parent Guidebook and Facilitators? Handbook.