TRC held its 27th Annual General Meeting this quarter, which was attended by representatives of the Governing Body as well as member schools. The meeting had been delayed due to the pending USAID SRP audit upon completion of which we were able to call the meeting. Our new project on critical thinking skills kept our calendars packed with activities and deadlines. It’s been a great start as far as establishing liaison with different levels of stakeholders is concerned. TRC led the formation of a Working Group with members from different public and private sector organisations to initiate work on critical thinking modules for ECE to primary levels. We also set up a National Review Committee to help the project with advocacy and policy level reforms at the national level. Our work in eight community schools of Sehwan, as part of the PSS project, continued with our teams making consecutive visits to the field for supporting GRS implementation, baseline assessment, teacher training refresher and CAB meeting. Through PSSP, we also made possible provision of activity based learning resources for children and resource kits for teachers. On the workshop programme front, an 84-hour course for primary teachers, based on five modules, was introduced and nine multi school workshops were carried out. TRC Case Study published by UNESCO In February 2014, UNESCO published a paper titled “Teacher training in support of Early Childhood Education in Pakistan: A case study of the Teachers’ Resource Centre” authored by our Academic Programmes Advisor and ECE expert, Mahenaz Mahmud. Against the backdrop of Pakistan’s challenging and multi faceted educational context, the author expands the focus to reinforce significance of ECE and lack of cross-sectoral institutional capacity and buy-in for professional development of early years teachers and school environments. She explains why it is imperative to bring reforms to teacher training in ECE and for elevating the status of teachers. TRC’s ongoing efforts to create innovative and challenging opportunities for ECE teachers are discussed. Through ECE-CP, TRC aims to help teachers to evolve into educators who not only nurture a passion for working with children but also develop a holistic understanding of what children are all about and how best they learn. Since ECE-CP is designed to both support and challenge aspiring and experienced ECE teachers, the programme’s framework is highlighted as one which lays the foundations for lifelong learning for those who want to enrich their work with children. You can read and download the paper by clicking on the link below: TRC Case Study TRC Trending… TRC is on Facebook! We encourage all our readers to like us and subscribe to our page. Link up with us, ask questions, discuss issues, exchange views and help us in cultivating an empowering online community of ECE practitioners and activists … Lets connect to make a difference! https://www.facebook.com/TRCPakistan Projects at TRC Pathways to School Success Project (PSSP) Supporting GRS Implementation Since TRC is responsible for trainings of teachers and Young Facilitators and extending support to teachers for 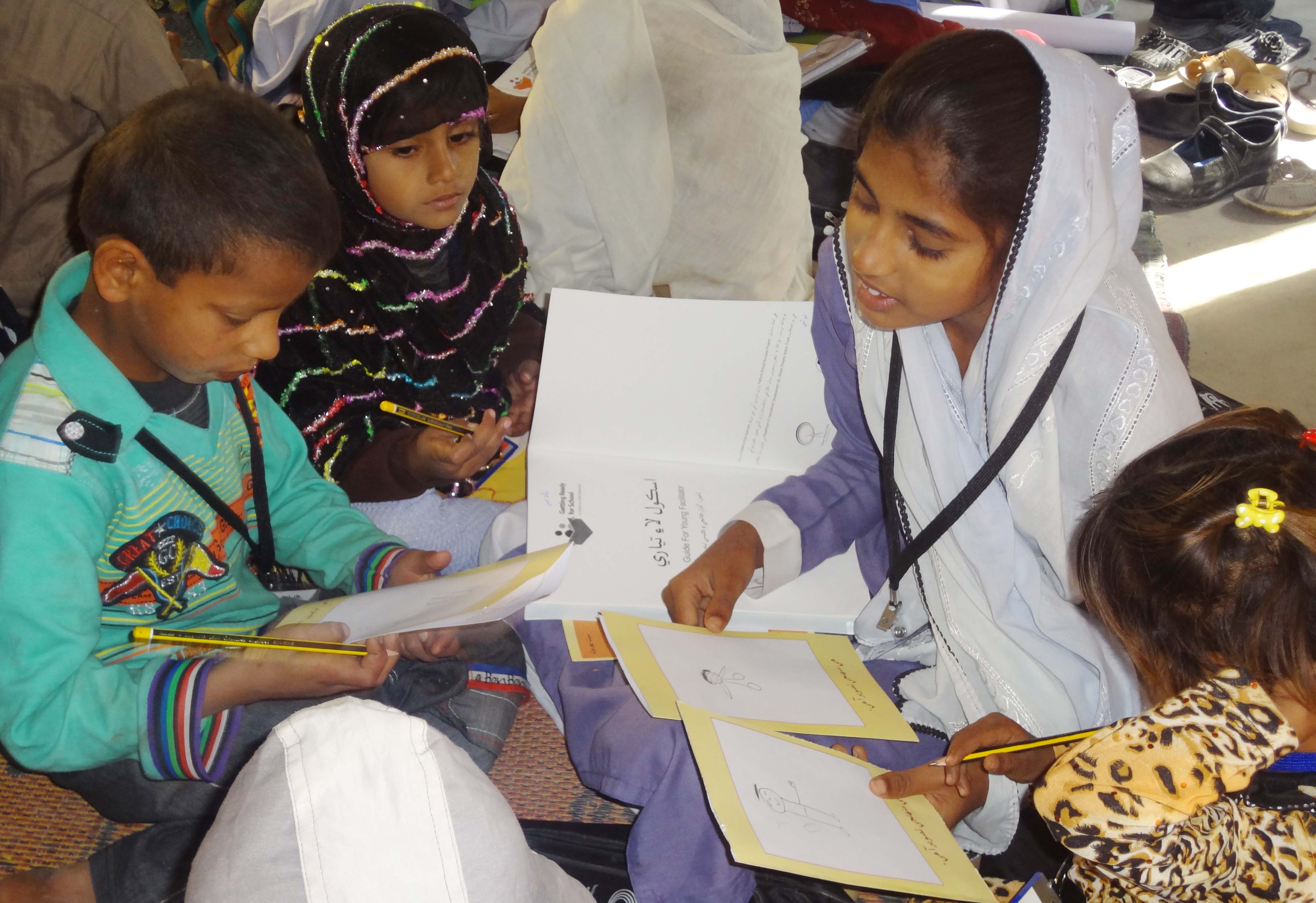 implementation of activities at the school level, 2 support visits were carried out in January to the eight community schools in Sehwan. The purpose of the visits was to ensure that teachers and YFs feel supported and confident to initiate “Getting Ready for School” activities. TRC’s team visited the schools and worked closely with teachers and YFs. Demonstration of sessions, discussions with children and teachers and addressing stakeholders’ concerns were some of the key activities carried out during visits. Baseline Assessment of Young Learners In February, baseline assessment was carried out with 120 Young Learners by TRC. This was a last minute donor requirement and was not part of the project plan. Stationery pouches with colour pencils were provided to children being assessed. 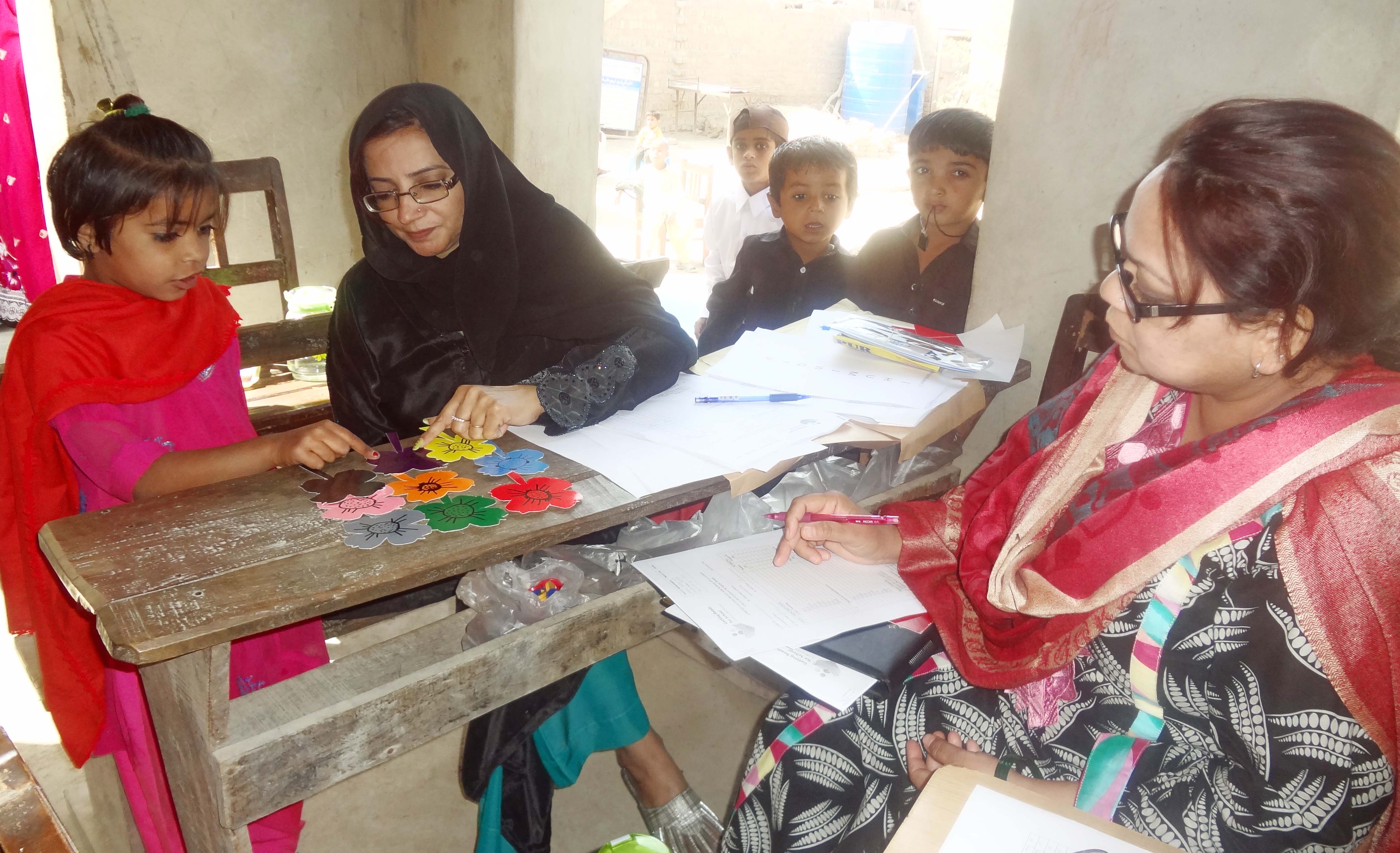 TRC conducted SRA (School Readiness Assessment) using the GRS tools on a sample (30% of total 400 YLs). An estimated 15 YLs from each of the eight schools were selected for assessment. The exercise was completed in a span of 4 days in 8 community schools. TRC’s team conducted the baseline survey with the assistance of local data collectors. Training Refresher with Community School Teachers A two-day refresher was organized by TRC during the last week of March with teachers of the community schools participating in the project. The purpose was to introduce new pedagogies and resource material and discuss classroom level challenges. Teacher kits, containing reading resources and stationery items, were handed over to 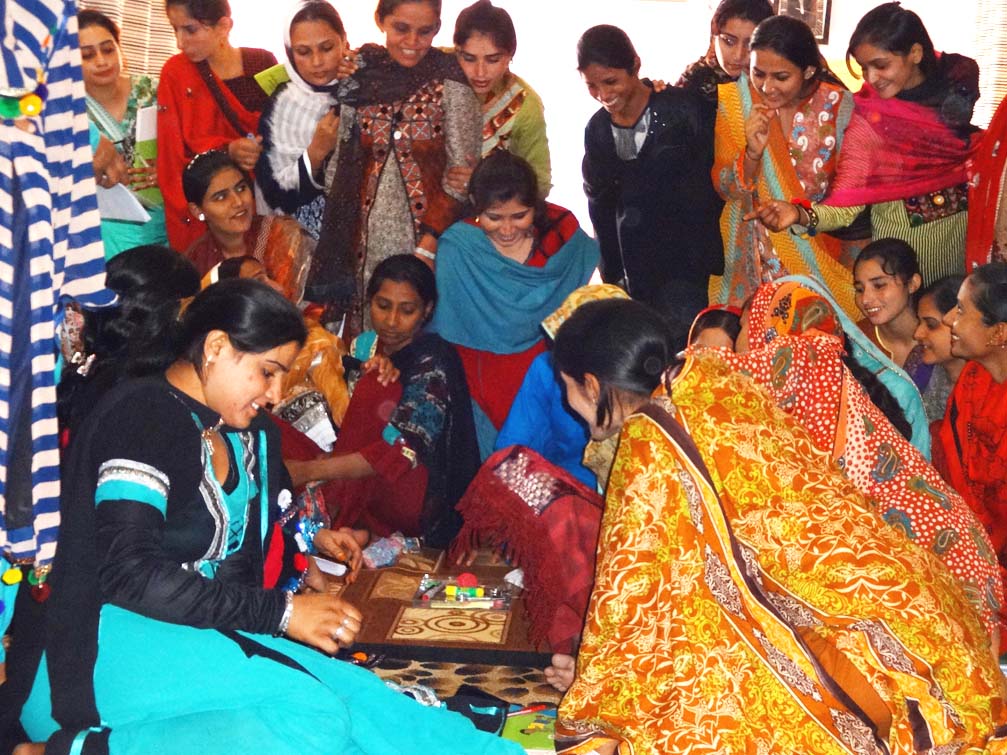 teachers, which were well received. A set of customized wooden blocks was also introduced for promoting play based learning and linking it to GRS and DRR. 3 sets were made available for each school. Each blocks set has about 64 pieces of varying shapes and sizes. Darris or mats were also provided to each school for making seating comfortable for children while they engage in GRS and DRR sessions. The workshop also addressed issues like children’s health and hygiene and teachers’ role therein as well as record keeping in schools. At the end of the two-day session, the teachers were asked to develop their own school-specific action plans to chalk out the trajectory of GRS and DRR implementation. 33 female teachers attended the sessions. Organizing Community Support for DRR and GRSS Community Advisory Board (CAB) has been set up as part of the project with representation from parents, teachers and community sparks to ensure that everyone is taking responsibility and lending support to DRR and GRS, the two key objectives of the project. TRC team held a meeting with CAB members, in Sehwan, at the local partner’s office. 6 female and 20 male 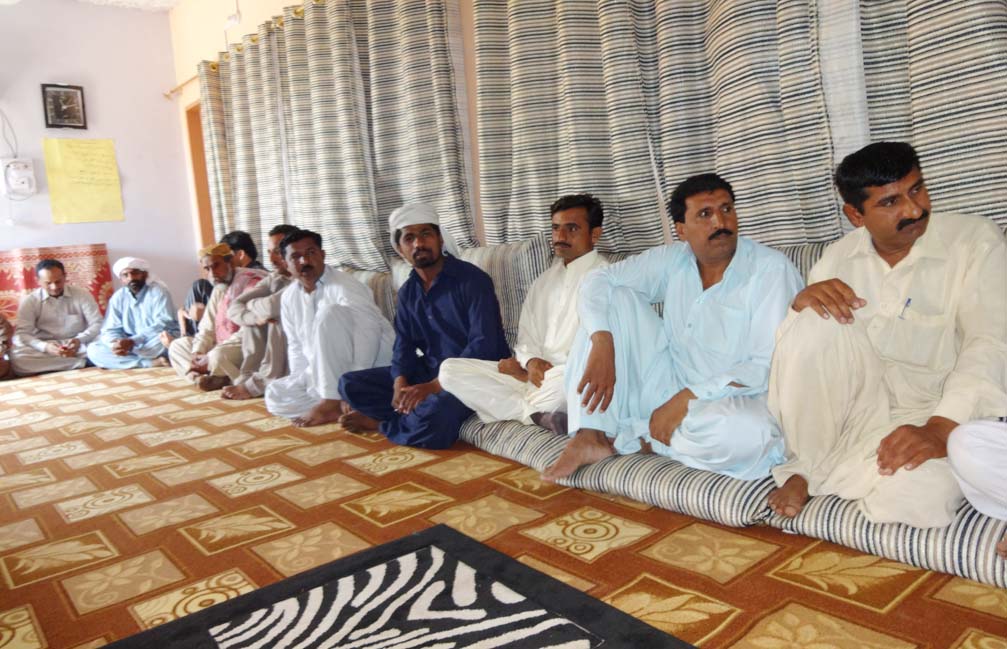 representatives attended the meeting. They were apprised of the project activities, roles and responsibilities of CAB, resources provided to schools, significance of recording accurate date of birth and meetings schedule. The TRC team also discussed importance of ECE and encouraged CAB to become a platform for ECE advocacy in the communities they represent. Issues like children’s health, hygiene and educational needs, addressing gender discrimination in education and ensuring on-time enrolment of the children in schools were also discussed. The meeting was well received by the CAB members and had favourable outcomes for the project. The CAB committed to carry out regular school visits, hold communal gatherings for raising awareness on GRS and DRR, make all efforts to maintain accurate birth records and will hold monthly meetings of their own, observations of which they would share with the local NGO and TRC staff. Improving Quality of Learning through Quality of Teaching (IQLQT) TRC has embarked on a one-year project with financial support from the Open Society Foundations (OSF) from January 2014. The overarching goal is to develop a repository of contextually relevant teaching and learning material grounded in critical t
hinking with potential for country wide application across both public and private sector education systems in ECE and primary classrooms. Key activities undertaken during the quarter included: Setting up of the Working Group and National Review Committee A Working Group has been formed by TRC for sharing and pooling expertise of different individuals working as teachers, resource developers and teacher educators from both public and private sectors. The WG will lead the academic work on critical thinking modules which will be pre-tested in ECE and primary classrooms by TRC as a concurrent research process. The work undertaken by the Working Group will go a long way in setting direction for incorporating critical thinking into our classrooms all over Pakistan and will pave the way for sustainable, enriching and child friendly reforms in the way we teach our children to become critical thinkers.
To endorse the modules pretested and finalized by the Working Group, a National Review Committee has been set up which has representation from government’s curriculum and teacher education machinery and NGOs working in education. Meetings of the Working Group During the reporting period, two meeting were held with the WG members at TRC. Broadly the meetings covered discussions and agreement on critical thinking parameters for developing modules, reviewing existing lesson 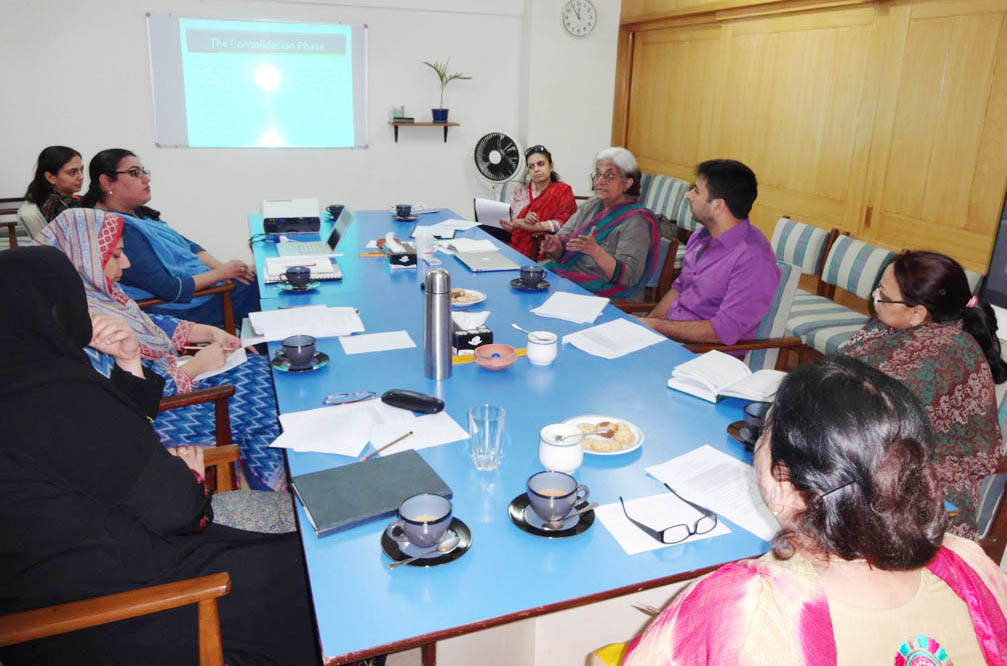 plans from different types of schools and initiation of work on remodelling lessons plans to make them critical thinking centric against a multi-faceted backdrop of diverse and challenging schooling contexts. Minutes and photographs of both meetings were sent out to the National Review Committee members for their information and feedback. Selection of Schools for Module Pre-testing Visits were made to a number of schools as per categories defined in the project framework for acquiring consent to become part of the pre-testing process. Meetings were also held with school heads and government functionaries for soliciting support. 12 schools were selected for pre-testing work. These include a cross section of schools ranging from middle income private schools to NGO run multi grade home schools. The diverse spectrum of schools is expected to provide a conducive platform for testing the effectiveness of modules in terms of ensuring their replicability at the national level. Other Project Activities In addition to these, a number of key activities were carried out which include project staff recruitment process, back and forth visits to schools for collecting data and acquiring lesson plans, ongoing correspondence with NRC and WG members, series of in-house meetings for concretizing project’s strategic framework and coordination with donor. Finding and recruiting suitable HR for the project proved to be most challenging. TRC-PARCO Partnership for Teacher Education The Two twelve-hour workshops titled ‘Moassar Tadrees ki Maharatain’ were 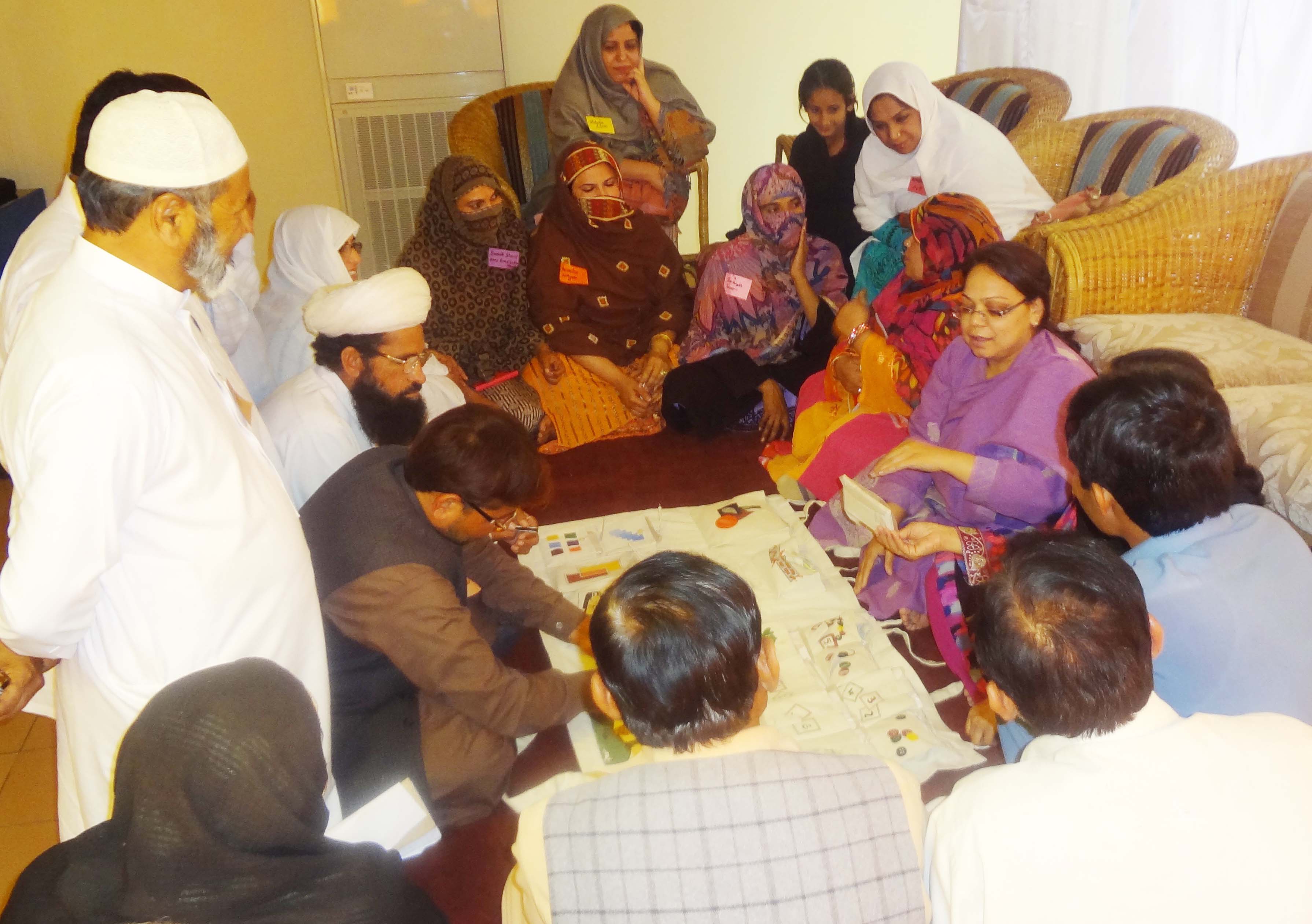 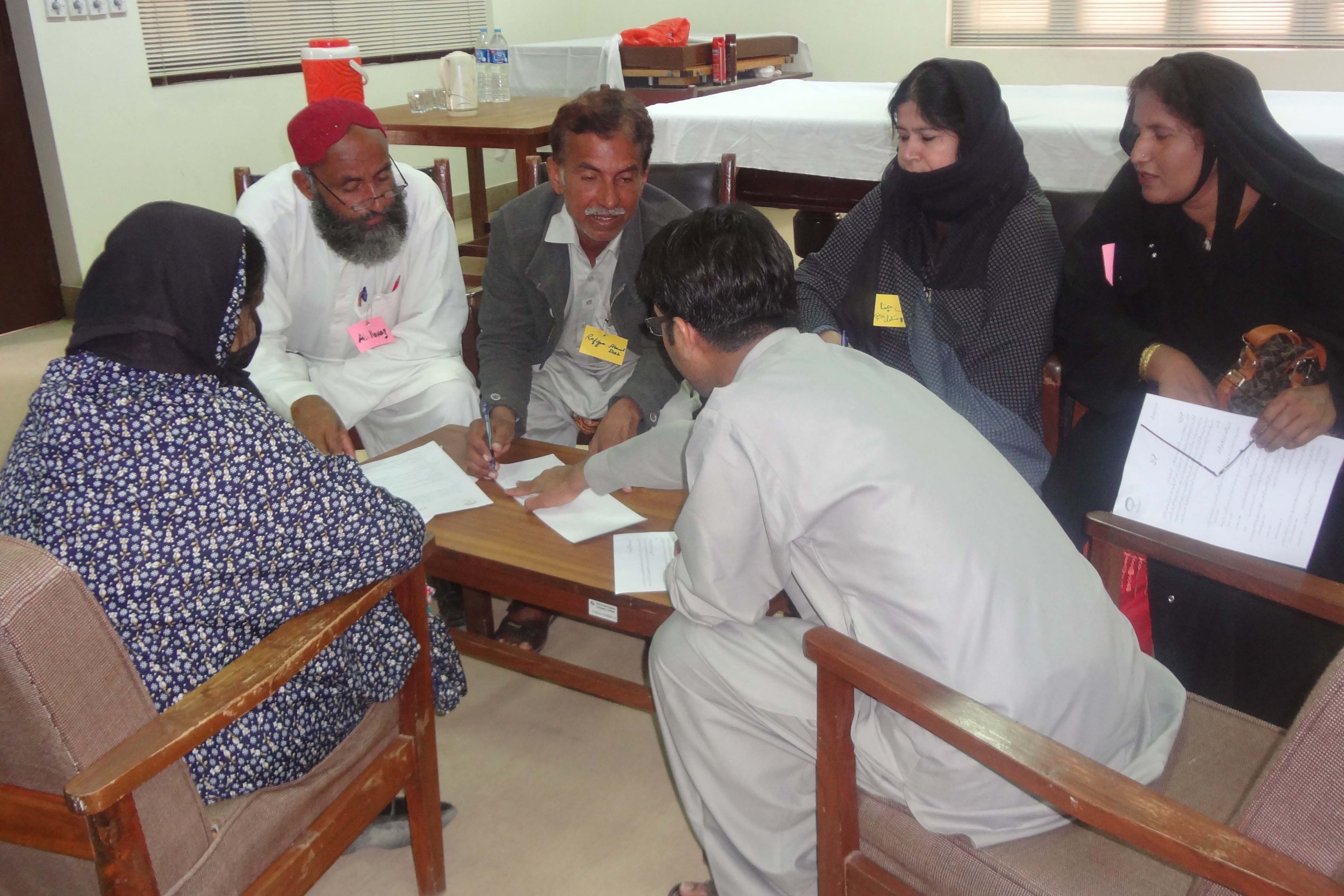 was introduced as an effective early years’ learning resource. Different participatory methods such as group discussion, role plays, case studies and group presentations were used to engage participants who in turn also prepared a lesson for demonstration. Participants were encouraged to share their experiences and challenges related to teaching. Multi School Workshops from January to March 2014 During the quarter, nine multi school workshops were carried out which were attended by a total of 168 teachers from TRC member and non-member schools. In January, four workshops were conducted titled ‘Teachers as Student Mentors‘, ‘Understanding Behaviour of Young Learners’, ‘ Teaching Directed Writing at O Levels’ and ‘Are You an Effective Teacher?’ These workshops were attended by 17, 25, 13 and 13 participants respectively. ‘Building Vocabulary’, ‘Creating a Positive Learning Environment’, ‘Bachon ki Nashonuma aur Seekhney ka Amal’, were the three workshops carried out in February. These workshops were attended by 19, 13 and 31 participants respectively. The workshop on ‘Building Vocabulary’ had to be rescheduled from 8 to 15 February, due to a strike call in the city. Three workshops were scheduled for March. One of them, planned in Sindhi for the first time at TRC, titled, ‘Bachon ki Nashonuma’ had to be cancelled as no registrations were received. The other two workshops titled, ‘Designing and Administering Tests’ and ‘Numbers are Fun’ were conducted as scheduled. These were attended by 14 and 23 participants respectively. TRC Launches Primary Certificate Programme 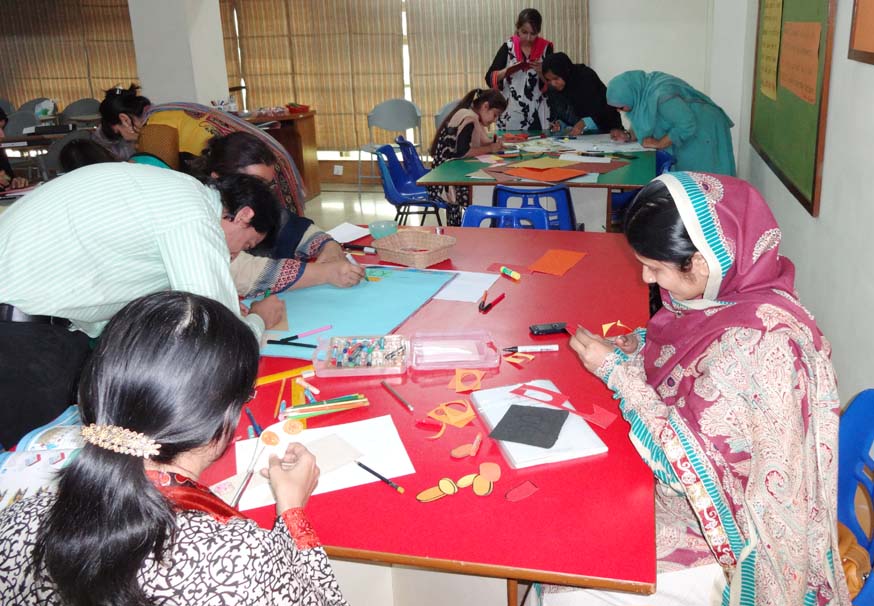 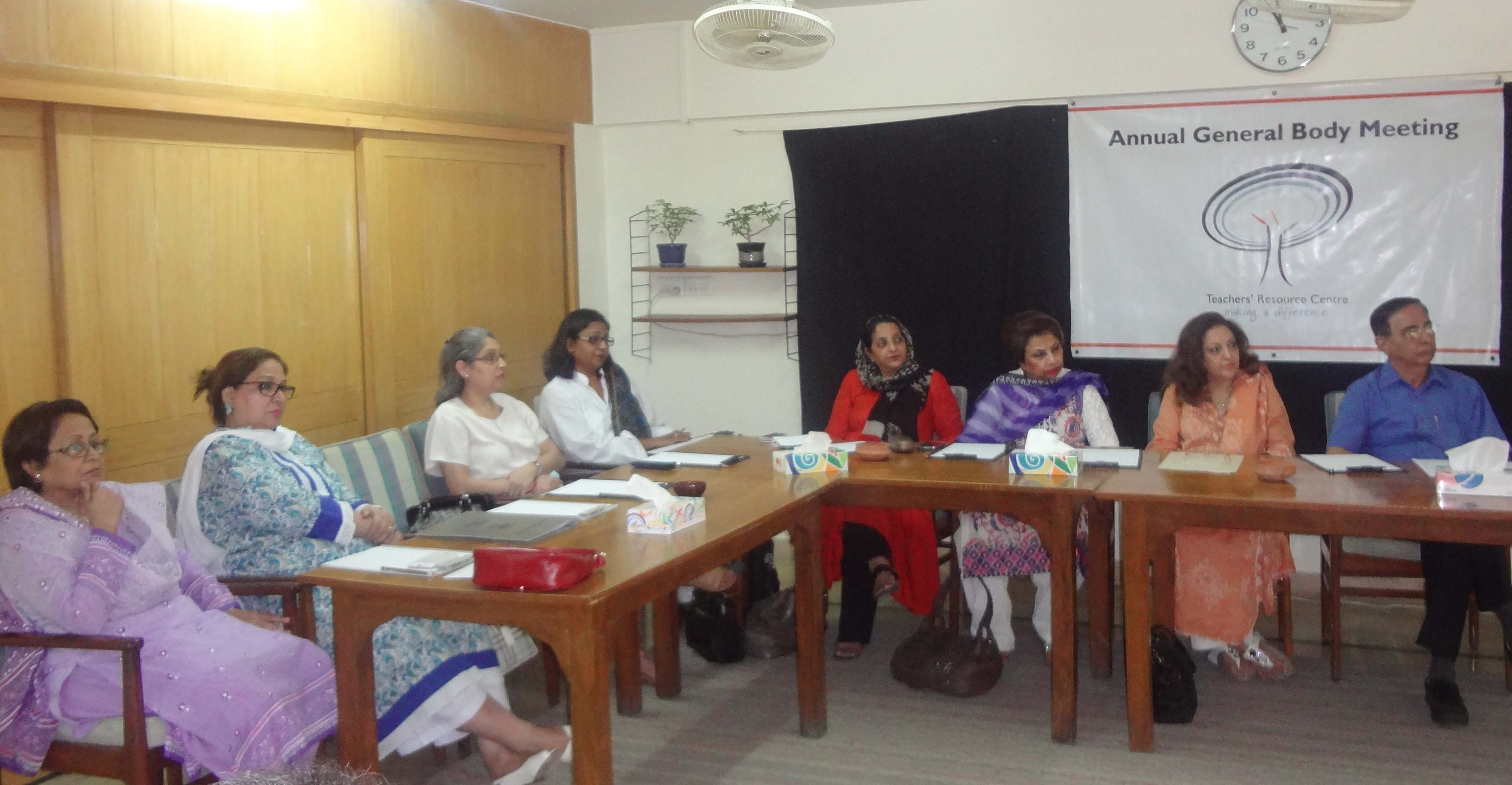 Programme to which TRC was a partner in the period covered. The Chair informed those in attendance that there would be two AGMs in this calendar year. The Director’s Report for the reporting period was presented by Mahenaz Mahmud, Academic Programmes Advisor, TRC. She was joined in her presentation by Rubina Naqvi, Senior Manager, Membership Network and Ambreena Ahmed, Assistant Director for their respective portfolios.
Details of projects, workshops and advocacy and outreach were shared with the forum as well as plans for future were discussed. Merger of IECE and TRC as one institutional entity was also highlighted. To this end, two members of the IECE Board, Mahtab Akbar Rashdi and Shanaz Ramzi, were co-opted onto the TRC Governing Body with the other members’ consent. A.R. Mithani, Honorary Treasurer, presented the financial statements for the year ended June 30, 2013 that was audited by Messers. A. F. Ferguson & Co. The auditors have expressed a clean and unmodified opinion on the financial statements. The accounts were confirmed by the Chair as proposed by Ms. Seema Talat and seconded by Ms. Yasmeen Shahzad. New Additions at TRC Ms. Shaheen Mehboob Ali joined TRC as a Research Associate, in January 2014. Mr. S.M. Jafar Rizvi joined as HR Officer in March 2014.