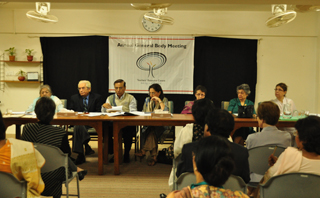 Our AGM for 2009 – 10 was held at the TRC office on Saturday, January 29, 2011. This year, four of our Governing Body members completed their term with us. We are grateful to Sr. Margaret Madden, Ms. Faryal Hussain, Mr. Abdul Khaliq Khatri and Ms. Z.T. Mavalvala for their support and direction over the years. 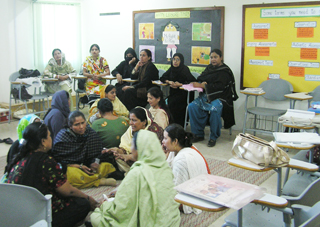 During classroom support visits, following the initial 50-hour NC-ECE Curriculum implementation workshop, it became apparent that many teachers were facing similar challenges in creating an optimal learning environment in their classrooms. This interactive, discussion-based workshop was designed to help teachers revisit their knowledge, skills and capacities in the identified areas.

Focusing on the factors that contribute to an effective working environment, the workshop highlighted the importance of developing a positive attitude at work as well as elements required to be a professional. Teachers examined their own profiles and discovered their working styles. The responses from the participants were candid and led to useful discussions on ways to resolve issues faced by them.

The workshop was well received and it is hoped that the outcome of the training sessions will be positive and contribute towards maintaining a working environment congruent with Links’ vision.

February 10, 2011, TRC screened Zor Lagaa Ke Haiya for 35 head teachers of RCC partner schools in Korangi and Jamshed Towns. Mirroring the apathy of contemporary society to environmental issues, this nonstop action comedy and adventure, showcased how a group of children, with the help of a homeless man, overcame all the obstacles to save a tree from being razed to the ground by a money-minded construction giant and his contractor. 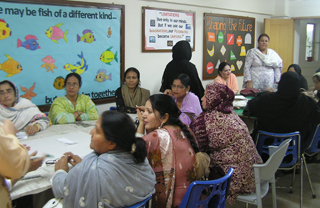 The post film discussion was interactive and thought provoking as participants were split into 4 groups to ponder and debate the following questions:

1. A beautiful and clean environment is known to make a person feel happy. As a head, what role can you play to improve the natural surroundings of your school?

2. In today’s day and age, there is a noticeable decline in community living and a sense of brotherhood and trust. What do you think the reasons for this are?

3. What are the causes for natural disasters like floods, tsunamis and earthquakes? As a concerned and responsible citizen, what role can you play in minimizing them?

4. Unconditional love and unity are prevalent in children who selflessly think of what is best for everyone. How can we as adults adapt our behaviour to be more like them?

The discussion led to the head teachers looking into different environmental issues such as why we are seeing a global change in temperature, the effects of chopping down trees in large quantities, and how pollution effects us. They discussed solutions including growing and caring for trees, using water, gas, electricity and paper carefully, avoiding usage of polythene bags, leading a simpler life and respecting human and animal rights. Looking at the big picture, they further identified issues that plague our society like common misuse of resources, corruption, and a general disregard for law and order.

The head teachers commented that the film gave them a much-needed opportunity to reflect on key issues pertaining to their community, and the role they could play in improving their environment, not just as individuals, but also as head teachers and mentors. 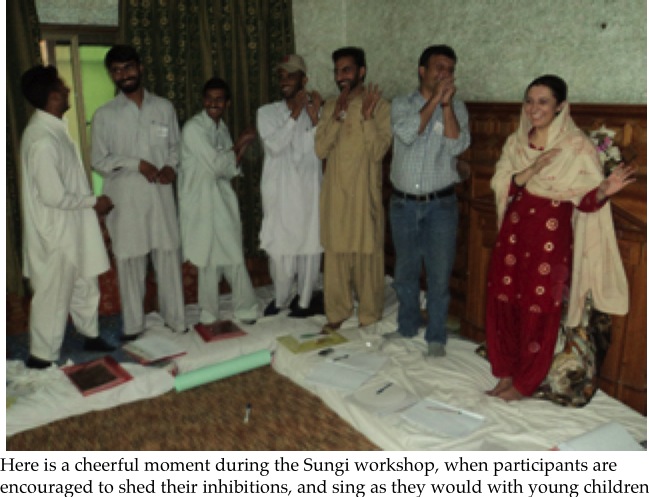 One of our roles as Technical Assistance partner for the RNE and AKFP supported RCC project, is to train ECE teachers of RCC?s Implementing Partners. In 2010, RCC welcomed two new partners: Sungi and MIED.

Just to backtrack a little, in October 2010, we had conducted workshops for 73 ECE teachers of schools managed by Sungi and MIED in Mansehra and Abbotabad. This year, in February 2011, we conducted six more workshops, three for each organisation, to build the capacity of another 74 ECE teachers and 85 head teachers. The workshop for head teachers aimed to introduce them to the NC-ECE, the importance of Active Learning in holistic development and how the daily routine unfolds in an active learning environment. The role of a head teacher in supporting active learning was dealt with in detail. 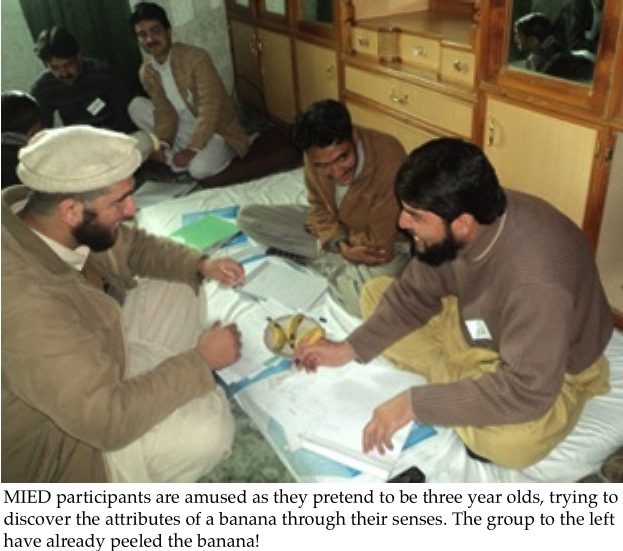 The main objective of the 48-hour workshop for teachers is to equip them with the knowledge, skills and attitudes that are necessary for implementing the National Curriculum for ECE. Some of the topics covered were: child development, developmentally appropriate practice, learning content areas, organizing the learning environment and the daily routine.

TRC was invited to be part of the advisory committee and participate in this 2-day meeting to discuss content and provide feedback on relevance and cultural sensitivity. Ms. Natasha Ansari represented TRC. The programme is scheduled to air later this year.

March 1, 2011, TRC and HSBC signed a MoU to officially begin the Pehla Taleemi Basta (PTB) project. This project will distribute 150 PTBs across 6 towns of Karachi: Kemari, Bin Qasim, Shah Faisal, Lyari, Landhi and Malir. TRC will also train 150 teachers on how to use the PTB in their classrooms.

On March 15, 2011, the film Zor Laga ke Haiya was screened for children of government schools from Baldia Town. A total of 46 children and 10 teachers of different schools attended the session accompanied with their ADOE. The multi-grade group, had girls from Classes 5 to 8.

The session started off with a brief introduction to TRC. A quick survey about the number of children who had already viewed the film was done (there were five and they were happy to watch it again, because they hadn’t quit 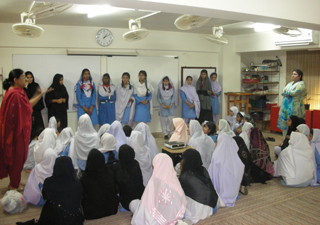 e understood it the first time) and the theme of the film was shared.

Following the 120-minute screening, a general discussion about the film took place and the children shared the bits they had enjoyed. They were then divided into groups based on their grade levels, and were asked to identify and come up with solutions to environmental issues in their communities.

The children shared their views and talked about their experiences within their small groups. Later one representative from each group was responsible for sharing the highlights of their discussion. A delightful and heated discussion followed as the facilitator helped them unravel the issues and solutions.

The children left TRC feeling very positive about their experience and they made these promises:

They will save one rupee from their snack money everyday, and make a collection to buy and plant tree saplings to ?green? their immediate environments.

They will say ‘NO’ to the use of plastic bags in their shopping area. They would stitch cloth bags for their water bottles for school, and convince their parents to take baskets and containers from home when setting out for groceries.

They will share their experience and learning from the film screening and discussion, with the rest of the children in school.

An Introduction to Media Literacy

Our first Media Literacy workshop was conducted in 2009. It was high time we introduced media literacy to more teachers.

On March 25 – 26, 2011, teachers from The A.M.I School, Beaconhouse School Systems, Generation’s School, Indus Academy, P.E.C.H.S. Girls’ School, Valika Comprehensive School and P.E.C.H.S. Girls’ College came together to become more media literate, which is, the ability and skill to be more discerning consumers of print and electronic media. The majority of teachers were from the primary level, which is the level the workshop was announced 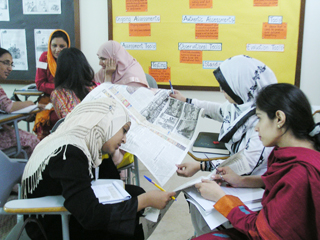 for. There were some pre-primary teachers, one of whom attended because she has older children and there was also one college teacher. Mahenaz Mahmud, Uzma Rauf and Madiha Afzal facilitated the workshop.
A number of participants reported that on the way home after the first day, they viewed all the billboards more consciously, asking themselves questions such as, ‘So, what is behind this message?’ ‘Who benefits from it?’ Another participant said she was particularly conscious about listening to the news on different channels.

At the end of the workshop, most participants said that they would recommend the integration of media literacy into their curricula, to their school administration.

One participant shared that by attending this workshop, and becoming aware of how critically one needs to analyse the media, would make him a better citizen.

TRC aims to form a Media Literacy Group, which will pilot the ‘formal’ integration of media literacy activities into their curriculum. They will meet at TRC on a regular basis to share experiences, and develop materials to advocate media literacy to other schools.