April 28, 2010, the Aga Khan Foundation organized the second research meeting as part of the RCC Programme. The initial findings of AKF’s research on RCC schools along with research conducted by all partners were shared. Although TRC is not conducting any research for RCC, it was invited to share its findings from the evaluation of teaching and learning practices in partner schools. While there is a visible positive difference in the learning environment of RCC supported schools from that of other government schools, TRC reiterated that teachers and academic mentors need to bring improvement and innovation in their practices especially with respect to the use of the National ECE Curriculum.

April 20, 2010, TRC was invited to participate in an Open Dialogue with Civil Society Organizations/ Academic Institutions working in Education. It was organized by Pakistan Education Task Force (PETF) and co-chaired by Ms.Shehnaz Wazirali, Special Assistant to the Prime Minister. The main goal of PETF is to strengthen bilateral relationships with the Government of UK for improvement in social sectors of Pakistan.

PETF invited several CSOs to identify key issues and areas for improvement in education. Among other things, Ms. Seema Malik, Director TRC, asserted that the main issue remains implementation of the policy and curricular frameworks developed with and for the public sector.

PETF aims to share the findings and recommendations with the Prime Minister and subsequently provide grants for launching innovative programmes that will fill in the existing gaps of policy and implementation in the education sector.

The AGA Award for 2009, managed by Idara-e-Taleem-o-Aagahi (ITA) is dedicated to excellence in teaching at the Early Years level. As a pioneer of ECE in Pakistan, TRC, upon request, participated as one of the judges providing expert opinion, critical feedback and enriching the process of selection. Always supporting the advancement of ECE, TRC contributed to the prize money for the winners. 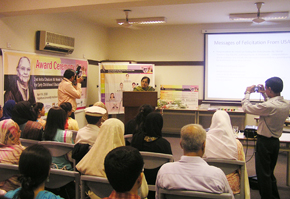 The ceremony for the 2nd AGA World Teachers’ Day Award was successfully organized on April 6th by ITA in Karachi, honoring teachers whose commitment, competence and excellence speak for themselves.

On the occasion, Baela Raza Jamil from ITA spoke about the importance of recognizing and celebrating professional excellence locally. A new precedent was set as she stressed on the importance and imperativeness of not looking at other countries for guidance and expertise and tapping into our own wealth of great pioneers and leaders. An AGA reward has been established for just this reason, honoring a living legend par excellence in our country as a teacher and a solid citizen.

Particularly exciting and fulfilling, when talking about ECE initiatives in Pakistan, she said it is extremely critical to acknowledge the role TRC has played in ECE, especially thanking and highlighting the work of our Director Programme Development, Mahenaz Mahmud, whose passion and relentless efforts have pushed the ECE agenda in policy circles. As a result, Pakistan is the only country in the world where ECE is formally integrated in school education as a policy.

The winner of first position was Misbah Rani from Sanjan Nagar School, Lahore who received a sum of Rs. 100,000 as prize money. 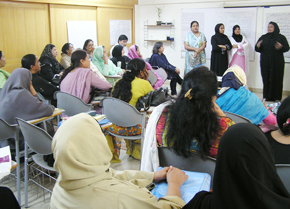 Supervisors and Heads from 40 partner schools in Korgani and Jamshed Towns, attended a one day ECE refresher workshop at TRC on March 13, 2010. Refresher workshops are part of our plan for the RCC project, which is supported by RNE and AKFP.

The objectives of this workshop were to review and reinforce the roles and responsibilities of supervisors and heads in consolidating the newly set up ECE classrooms in their schools. The workshop started off with a feedback session on Achievements and Challenges they had faced so far. Some of the following areas of concern which had been observed during classroom and school support visits, were also addressed. These were:

? supporting the ECE teacher in the classroom

A total of 42 participants attended the five-hour workshop. All of them found the session useful, saying it will help them continue their work in a more focused manner.

Presentation at the National Conference on Community Development

TRC participated by presenting a paper titled “Early Childhood Education in Pakistan: Count the successes & dis-count the scale and scope,” mainly shedding light on its journey of influencing policy for ECE through its practice and research oriented work. Current challenges for improving the quality of ECE in government schools across Pakistan were also addressed. Key strategies were discussed to push the policymakers and education bureaucracy to deliver on basic targets for setting up ECE classes across rural and urban areas.

TRC’s Farzana Kausar, Nighat Hasan and Seema Yasmin attended a Monitoring, Evaluation and Research (MER) workshop from 6 – 9 January 2010, in Hyderabad. The workshop was organised by AKFP under the RCC ECD Project banner. The objective of the workshop was to train participants on collecting data for the project school profiles, which is a basic part of the RCC research. The following topics were covered at the workshop:

? The significance and role of MER

? The principles of data collection

? Quality in data collection and management

A very useful part of the training was the hands-on experience provided through practice in the schools.

Over the last couple of years, our library users have diminished considerably. We are cognizant of the fact that most schools now have their own well resourced libraries, that transport, commuting and parking has become a nightmare in Karachi and there is the Internet from which lesson plans and activities can be downloaded. So with the approval of our Governing Body, we made a decision to revamp our library.

Our Library stock was reviewed in the last quarter of 2009, and a total of 3505 items were discarded. The items included 2515 books, 577 educational charts, 81educational toys and 332 audio and video cassettes.

This discarded material was put up for sale at TRC, on 6 and 7 January 2010. Schools eagerly came and purchased what they wanted. Several visitors were amazed at the rich resources on sale which were hardly used when they were part of the library. The remaining material has been donated to low-income schools.
We will keep our library going for the students and faculty of the TRC-Institute of ECE and for members of our training and development team. Members and TRC workshop leaders will also have access to the books and other resources.