The quarter saw activities ranging from project based assignments to multi school and school focused workshops. The 84-hour Primary Education Certificate Programme, which was initiated last quarter, successfully ended with a certificate distribution ceremony for its first ever batch. Another 30-hour course for school managers was also conducted. Field visits continued to Sehwan where we are closely working with 8 community schools for sensitising children, teachers and communities for Disaster Risk Reduction as well as on-time school enrolment. During the quarter, monitoring data was collected from all 8 schools and meetings were held with Community Advisory Board members in each community for galvanising support for the project. In our OSF supported project, rigourous academic work on developing critical thinking modules continued with back to back meetings of the Working Group. A teachers’ orientation was held to kick off the module pre-testing process and lesson plans from ECE to grade 5 as well as for multi grades were piloted in 8 out of 12 schools selected for the project. The quarter ended on a poignant note with Ms. Seema Malik, Director, TRC bowing out. She has been Director since 1992. The charge was handed over to the Assistant Director, Ms. Ambreena Ahmed. TRC Trending… TRC is on Facebook! We encourage all our readers to like us and subscribe to our page. Link up with us, ask questions, discuss issues, exchange views and help us in cultivating an empowering online community of ECE practitioners and activists … Lets connect to make a difference!

Projects at TRC Pathways to School Success Project (PSSP) During the quarter, the TRC team carried out a four-day long visit to the 8 schools in Sehwan to observe YL/YF 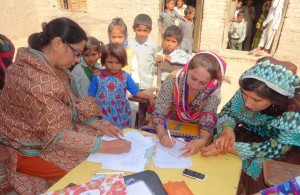 session, induct the second cohort of Young Learners (YLs) and Young Facilitators (YFs), support teachers, meet with community wise CAB representatives and hold discussions with the local partner’s field team. Additionally, relevant school related data was also collected. The process of inducting new YLs was organized and targeted as per the project requirements. More than 200 new YLs were ushered into the programme although this number would be confirmed in August 2014 when the team revisits. Teacher testimonies were recorded for age confirmations. Junior YFs or the second cohort were also 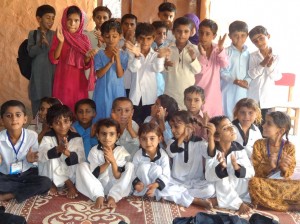 enrolled; this was done as a support mechanism to strengthen YL/YF sessions in the wake of new additional YLs joining the groups at the school level. The YL/YF GRS sessions are envisaged to conclude in September 2014. At the community level, meetings with CAB representatives were fruitful as a means of reaching out and disseminating GRS and DRR messages. CAB is being seen as a critical platform to sensitise wider community, including parents, regarding on-time enrolment, retention and Disaster Risk Reduction. Each CAB representative is committed to carry out awareness raising meetings with specific communal groups (both male and females) in their respective communities. The TRC team would be closely monitoring these sessions and recording feedback. Since the schools and NGO were busy with exams and new admissions, only one visit was possible in this quarter. Improving Quality of Learning through Quality of Teaching (IQLQT) TRC has embarked on a one-year project with financial support from the Open Society Foundations (OSF) from January 2014. The overarching goal is to develop a repository of contextually relevant teaching and learning material grounded in critical thinking with potential for country wide application across both public and private sector education systems in ECE and primary classrooms. Key activities undertaken during the quarter included: Before initiating pre-testing of modules in selected schools, a teachers’ orientation session was held on April 25, 2014 at TRC. 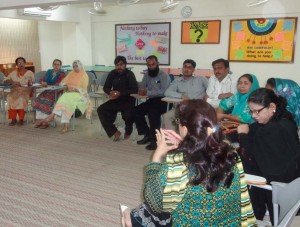 The purpose was to introduce the project, explain the piloting process and establish comfort level for classroom observations which were to follow. It was important to teachers’ buy-in for the pre-testing process as they would be implementing the critical thinking lesson plans in classrooms. The teachers were assured that TRC aims to gauge effectiveness of the modules being developed to promote critical thinking rather than assess individual teacher’s performance. Out of the 59 teachers invited for orientation from 12 schools, 41 attended the session. There was no representation from 2 schools owing to other school level engagements. The TRC team, however, carried out on-site orientations for these later on. 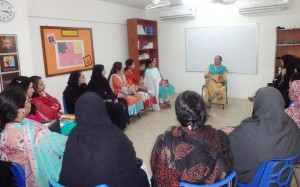 The participating teachers were divided into groups with TRC representatives facilitating each. This allowed for organised planning to develop a mutually agreeable pre-test schedule. The lesson plans to be pre-tested immediately after the orientation were also handed over to teachers. The pre-testing took off post orientation and the first module on “Plants” was pre-tested in 8 schools across different grade levels. Since schools were busy in wrapping up activities before the summer break, pre-testing could not take place in the remaining 4. Atleast 5 Working Group meetings were held this quarter and the exhaustive work on developing CT modules 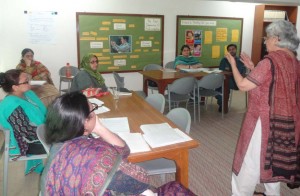 continued in full swing. Back and forth communication and feedback exchange, lesson plan remodelling for enriching them further with CT content and translation work carried on. The CT modules are being developed both in English and Urdu. Correspondence with the National Review Committee continued as usual. The members were duly kept in the loop with timely dissemination of information regarding project progress and developments. Work on developing an action research framework, one of the key deliverables of the project, was initiated and a detailed orientation was held with the team for deciding on the research focus and administration modalities. TRC-PARCO partnership TRC conducted two workshops in April for the teachers of public sector schools under PARCO’s Corporate Social Responsibility Programme. 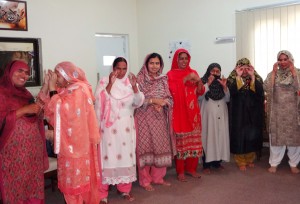 These workshops were a part of phase II of TRC-PARCO partnership. A 12-hour training titled ‘Moassar Tadrees ki Maharatain’ was conducted at Faisalabad and Machike Pumping Stations and were attended by 49 teachers in all. Nighat Hasan and Tabinda Jabeen were the lead facilitators from TRC. The trainings helped teachers in learning child friendly pedagogical techniques including planning, time management and classroom management. An orientation to Pehla Taleemi Basta, as an effective early years’ learning resource, was also provided to teachers. School Focused Workshops Classroom management at AMI The management of AMI approached TRC for a workshop on dealing with classroom management issues. Through consultations with the school management, areas of focus were decided and a 2 day session was carried out at the AMI school premises. The sessions were facilitated by Rubina Naqvi on May 28 and 29 and was attended by 20 teachers from primary and secondary levels. The workshop aimed to inculcate an understanding regarding classroom management issues, encourage teachers to share their own experiences and strategies and mutually identify possible causes and viable solutions to address persisting problems. Aspects of child development, learning styles and multiple intelligences were also touched upon as these were critical to understanding mutli-faceted behavioural issues in children across a spectrum of age and grade levels. The methodology was interactive and reflective, allowing participants to openly discuss specific classroom situations and reflect on strategies that have worked or could work better for effectively managing behaviour in classrooms. Time remained a constraint since the topic under discussion was vast and required further deliberations. . Many m
ore related themes emerged from the main subject and both facilitator and participants felt the need for additional sessions to tackle those separately. Teachers’ professionalism at Indus Academy The Indus Academy requested TRC to conduct a school focused workshop on “Professionalism” for its pre-primary teachers. In response to the request, a 2-day session was carried out at the school premises on May 19th and 20th. The workshop was facilitated by Rubina Naqvi and attended by 56 teachers. The main objective of the workshop was to unpack the concept of professionalism in teaching and helps, participating teachers understand the values and ethics of their own role as teachers. Through inclusive approaches, the workshop sought to draw focus on areas like team work, organisational culture and relationships amongst different tiers of school management. Contexts and situations specific to the school were extensively discussed with a resolution oriented perspective. Overall the workshop was well received by the group and saw a lot of candid discussion on the issues and challenges faced everyday by the teachers which directly or indirectly impact professionalism. Multi School Workshops from April to June 2014 During the quarter, six multi school workshops and a 30-hour course for school managers were carried out. The 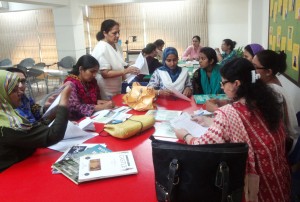 six workshops were attended by teachers from TRC member and non-member schools. 10 participants attended the management course. 5 workshops were scheduled for April, out of which 2 had to be postponed due to low registration and only three were held, titled “Understanding Growth and Development in Early Childhood”, “Numbers are Fun” and “Enhancing Memorising Skills and Concentration Power in Children”. In May, “Spelling Skills”, “Ibtida-e-Bachpan main Ustad ka Ravaiya“, “Making History Come Alive” and “Leadership Skills in Adolescents” were conducted. 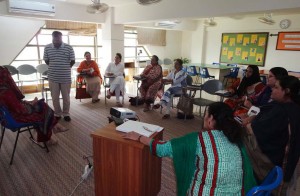 One workshop and a 30-hour course for school managers were scheduled in June. The workshop titled, “Collaborative Decision Making” had to be postponed due to disturbance in the city. The course titled, “Managing a Successful School” was conducted. It was attended by 10 participants. The 84-hour primary course concluded during the quarter and a certificate distribution ceremony was held for the 1st batch. Film Club The TRC Film Club screened ‘Finding Nemo’ on May 21st at its premises for the ECE students of G.G.P.S. Jut Line No.1. A group of 19 children and 3 teachers attended. 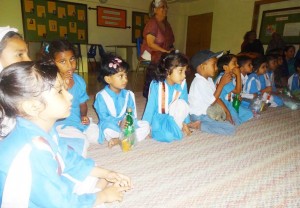 ‘Finding Nemo’ is a story about a young and ambitious clown fish who wants to explore the world around him. Despite his father’s persistent warnings about many of the ocean’s dangers, Nemo ventures into deep sea and gets caught by a diver. What follows is an exciting, funny and often heart rendering series of events that finally lead to Nemo’s dad finding him. Alive and in one piece!. 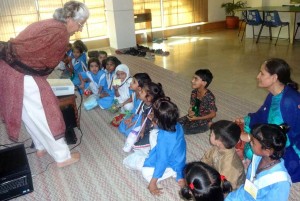 The post film discussion was facilitated by Mahenaz Mahmud. Children talked about the different situations and their favourite characters in the movie. Being inspired by the movie’s story, one of the children said that “we should listen to our parents and not go too far all alone”. Another child added that he liked Nemo’s father the most as he was “so brave”. The children also enjoyed colouring activities after the movie. Events and Seminars Certificate distribution ceremony for Primary Education Programme 2014 A ceremony was held on June 7 at TRC to mark the successful conclusion of the Primary Education Programme. The first batch of participants were awarded certificates and transcripts. Among those present were the 11 course participants, two course facilitators, Ms. Romana Sheikh and Ms. Rubina 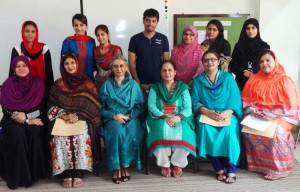