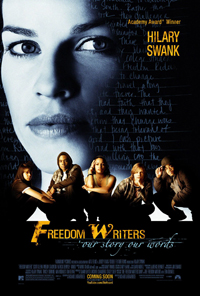 Synopsis:
Freedom Writers is inspired by a true story and the diaries of real Long Beach teenagers after the LA riots, during the worst outbreak of interracial gang warfare. Two-time Academy AwardÂ® winner Hilary Swank stars as Erin Gruwell, whose passion to become a teacher is soon challenged by a group of Black, Latino, and Asian students and gang members who hate her even more than each other. When Erin begins to listen to them in a way no adult has ever done, she begins to understand that for these kids, getting through the day alive is enough — they are not delinquents but teenagers fighting “a war of the streets” that began long before they were born. Erin gives them something they never had from a teacher before — respect. For the first time, these teens experience a hope that maybe, they might show the world that their lives matter and they have something to say.