An Update on the TRC-Institute of ECE: October – December 2014

TRC-IECE warmly welcomed its 9th cohort to the ECE-CP at an orientation session, which this time around was spread over two days, October 09 and 10, 2014. This session was to accustom the students with the ECE-CP protocols, get familiar with the environment and the people they will be interacting with during the ECE-CP and to meet their peers who will journey with them over the next ten months.

Being a mandatory event to attend, the sessions facilitated students in getting acquainted with the expectations of the programme and were introduced to the Field Education course since it features across all three terms. The differing requirements for in-service and pre-service students were highlighted.

The orientation helped students overcome discomforts of the unknown and eased the initial fears of joining a new setting as a student. Towards the end of both the sessions the students felt much more in control.

Regular classes of Term 1 officially started from October 13, 2014 with the course Play Experiences followed by Child Development and Learning Environment on Tuesdays and Thursdays. The students met with their respective course leaders and were introduced to the Term 1 courses, which would carry on for the next thirteen weeks.

Term 1 progressed as per plan, with regular classes and activities held according to planned 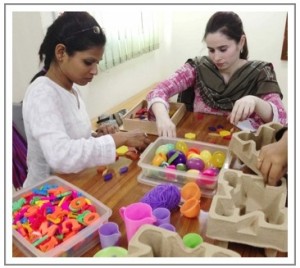 schedules. Assignments and evaluations, which were due during the term, had students experience a mixed bag of emotions – anxiety and nervousness, which is mostly the case when deadlines and /or exams and tests are due.

Classroom observations of in-service students and follow up discussions were also undertaken as part of Field Education.

Having crossed mid term of Term 1, tutorials were planned for students facing difficulty in their understanding of concepts covered during any of the Term 1 courses. Identified students were then supported during more personalised sessions to help them overcome academic issues.