An Update on the TRC-Institute of ECE: July – December 2013

During the quarter, as the final term drew to a close, wrap-up activities were in full swing. Faculty members were occupied with compilation of results and preparation and handing over of transcripts, field education reports, journals and feedback on final assignments to the graduating class. Along with bringing the term to a close, TRC-IECE members were managing the full-scale process of new intake for 2013-2014. This entailed coordinating with the shortlisted applicants, scheduling for written tests and panel interviews and the final run-up leading to selection of students for the new batch.

With the student body selected for the 2013-2014 cohort, classrooms were set up, display boards creatively done and other logistic preparations were made for the first term tee off. Prior to the orientation, student handbooks and academic calendars were also reviewed and updated.

Welcoming the 8th Cohort of TRC-IECE

TRC-IECE ushered in its 8th cohort of ambitious and enthusiastic in-service and pre-service students on September 7, 2013. The orientation was organized at the TRC-IECE

premises and was a curtain raiser to the commencement of the certification programme. Ms. Seema Malik, Director, TRC formally welcomed the new batch and introduced IECE, faculty members and administrative staff. She emphasized on the institutional norms of upholding standards of excellence and professionalism and encouraged the students to adopt the same since they will be part of TRC-IECE for the next ten months to come and even longer as members of the alumni. Ms. Uzma Rauf, faculty member, provided a run-down of academic and administrative aspects, touched upon logistic requirements and in-house facilitation mechanisms and responded to specific queries raised by the students during the discussion. The new batch members were also encouraged to breeze through their sets of academic calendars, Student Handbook and Academic Skills’ Guide, which were handed over to them during the orientation. Students were also shown the ropes as far as Field Education Course is concerned, since it is a part of all three terms, and differing requirements for in-service and pre-service students were highlighted.

Towards the end of the orientation, students visited the TRC library to collect their textbooks and library cards and interacted with faculty members present for questions and information that they had for the upcoming classes.

The 2013-2014 session officially began on September 9, 2013 with the Play Experiences course. The other courses for Term 1 are Child Development and Learning Environment, classes for which will be held on Tuesdays and Thursdays.

The most awaited event of the year for the class of 2012-2013 dawned amidst much fervour and nostalgia. The graduation ceremony for the 7th batch of TRC-IECE was held on September 28, 2013 at the TRC premises and was attended by the graduating batch and their families. In a small yet statuesque gathering, the certificates were awarded to the successful students who had braved the academic pressures while coping with the often-strenuous job and household routines during the ten-month long programme. The 18 graduates beamed with pride of being IECE certified early childhood educators beginning their new journeys to make a difference in the lives of children they will teach.

The memorable ceremony started with a warm welcome note by Ms. Seema Malik, Director, TRC who also took the audience down the memory lane and shared the account of TRC’s evolution as a leading teacher education institution as well as creation of IECE as a labour of love to strengthen early years education in Pakistan. TRC’s pioneering work and contribution to addressing the daunting gaps in quality of teacher education in Pakistan especially ECE were also shared. She also welcomed and introduced the chief guest, Dr. Nafisa Shah, Member of the National Assembly, an old friend of TRC and a leading voice in the country for social change. Dr. Shah graciously consented to chair the event despite her hectic schedule.

Ms. Mahenaz Mahmud, Academic Advisor, TRC-IECE briefed the audience about the nature and structure of the ten-month programme. She explained how the ECE-CP helps the student transition from a regular classroom teacher to a professionally trained early childhood educator. She then invited two graduating students, Maha Laka and Nazia Kashif, to represent their group and share some of their experiences of being a part of ECE-CP.

Both graduates narrated a high-spirited account of their association with IECE; this was accentuated with both gratitude and aspiration and reflected how the experience transformed their lives as human beings and teachers. A presentation was also shown to the audience highlighting perspectives of each graduate on how they felt the programme benefitted them. One of the graduates expressed her sentiments in a panoptic phrase, which aptly said, “the ECE-CP changed my life.”

After the presentation, Ms. Mahenaz Mahmud invited the chief guest to give away certificates to the graduating students and say 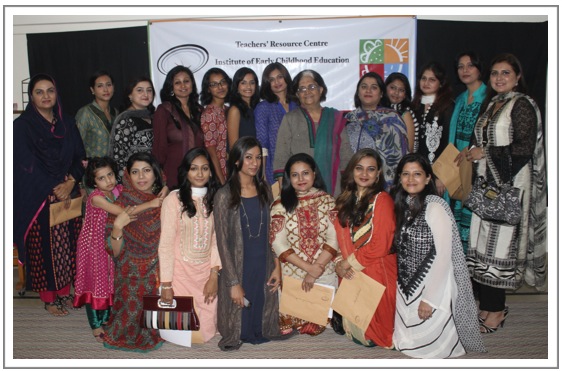 a few words on the occasion. In her address, Dr. Nafisa Shah, congratulated TRC-IECE and the students and their families for successfully completing the course and assuming greater teaching responsibilities as qualified early childhood educators. She spoke at length about the deplorable state of education in the country, touching upon issues of access, quality and gender especially referring to the rural areas and reinforced the need for strengthening institutions like TRC and TRC-IECE to bring about real changes in education offered to our children. She emphasized that education like other sectors is in a state of crisis and urgent steps must be taken by creating synergies through public-private partnerships to address the issues. Dr. Shah also highlighted the impacts recent natural disasters have had on the education infrastructure in the country. She openly appreciated TRC’s pioneering work in ECE which she said is “otherwise marginal and marginalized in the country” and assured the management of her full support for scaling up the institution. She also committed to advocate for TRC whenever needed and urged that TRC must be transformed into a fully equipped teaching college with government’s backing. She was of the view that teachers will be advocates of change in moving towards a tolerant nation.

In the end, Director TRC thanked the audience for attending the ceremony and invited everyone to a scrumptious tea treat bringing the send-off to a cheerful close.

The first term of ECE-CP progressed as per the Academic Calendar throughout the quarter. The faculty kept busy with pre-class weekly planning, preparation, post session reviews and marking student assignments.

Field visits to schools kept the in-service students on their toes and so did the feedback sessions with Field Supervising Teachers who provided detailed critique of students’ on-site performance.

As December drew to a close so did Term 1. Whilst the students and teachers got some respite from the usual class routines, the IECE faculty had their hands full for preparing for the transition to Term 2.