An Update on the TRC-Institute of ECE: January – March 2015

The quarter marked the conclusion of Term 1 and beginning of Term 2 with a week’s break in between. Term 1 wrap up came with grading assignments and projects and preparing results.

An interesting highlight of the quarter has been the student project titled “Ancient Contributions to Childcare & Early Education” which was part of the History & Philosophy course (HP 0001). It kept students thoroughly occupied as they had to do research as well as creatively design the project for presentation. 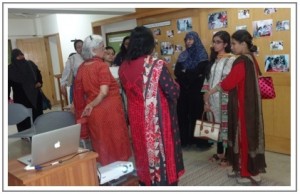 To showcase its Early Childhood Education Certificate Programme (ECE-CP), TRC-IECE organised an Open Day at its premises on Wednesday, 4 March, 2015. Held in two time slots, from 11:00 a.m.-1:00 p.m. and 3:00 p.m.-5:00 p.m., to facilitate both in-service and non-teaching (pre-service) candidates, the purpose was to introduce the ECE-CP in detail and facilitate interaction of potential candidates with the faculty.

A number of visitors, those mainly associated with schools; pre-primary, primary and secondary teachers, coordinators, headmistresses, principals, and some not related to the teaching profession, attended these sessions. Through a gallery of displays, the visitors were walked through the ECE-CP classroom giving them a sense of what to expect from the programme. Testimonials from some of the alumni proved inspiring to encourage potential candidates for registering themselves. 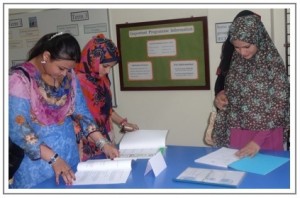 The Open Day was well received by all those who attended and provided insights into what the 10-month journey would look like in terms of its academic rigor, diversity of approaches and relationship with the faculty.

IECE Alumni were welcomed back to TRC for the third IECE Annual Reunion on 18 March, 2015. It was a fun filled event with lots of laughter, enjoyment, catching up and great food.

This year the turnout was tremendous; we saw the largest number of attendees … 49 to be exact. Maha Laka and Nazia Kashif (2012-13 grads) were the event organisers this year.

Academic Advisor, TRC-IECE, Mahenaz Mahmud, presented the idea of an Alumni Association which was met with great enthusiasm. An eight-member committee was formed and roles and responsibilities and scope of work of the committee were discussed in detail. The purpose was to further strengthen the programme and ensure institutionalisation and sustainability.

The organisers had prepared a game of Taboo based on the courses offered at TRC-IECE. It was an exciting game, which really brought out everyone’s inner child. All participants were on the edge of their seats to guess the word.

The Programme Advisory Committee (PAC) met on Friday, 20 March, 2015 for the second time since it was set up. The one-point-agenda of this meeting, which was led by Tanya Shah, was to create awareness and disseminate information about TRC-IECE and its programmes amongst stakeholders in order to boost enrolment.

The meeting started off with a concern raised by the members requesting TRC to also look into addressing Special Educational Needs through the programme. Following a useful discussion, it was agreed that TRC would develop a specialised course with the expertise of a PAC member who is a clinical psychologist.

A marketing plan was shared with the respective members highlighting how the key target audience will be reached through a mix of tested and new strategies. Timelines were also set and agreed upon. Members of the PAC offered their views and opinions in light of their experiences and made valuable suggestions for the way forward.