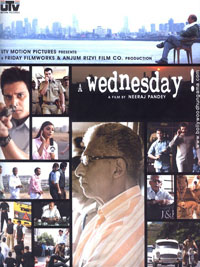 Synopsis
‘A Wednesday’ is a film starring Anupam Kher, Naseeruddin Shah, Jimmy Sheirgill and Aamir Bhasin. The screenplay is excellent and the characters have been masterfully created. Prakash Rathod, Commissioner of Police, Mumbai gets a call demanding the release of four militants in exchange for information on bombs that a man has planted in various parts of the city. At first, Prakash suspects it to be a crank call but his doubts are dispelled once he actually finds a bomb planted in the police station right opposite his Police Headquarters.

Now Prakash Rathod is in a real dilemma. Should he release the militants? Militants who have been caught at the cost of lives of police officers and who are responsible for unaccountable damage to civilian lives and property. Or should he just think of all the innocent people who will die today if he decides not to let them go?
Prakash Rathod is not a man who will give up so easily. He gets a team of his best men together and taps all his resources – he is going to leave no stone unturned in his mission to track down the man.

Who is this man? What is his identity? What are his intentions and what are the motives behind his actions? In due course the caller reveals his true identity and answers these questions, raising some more in the process…